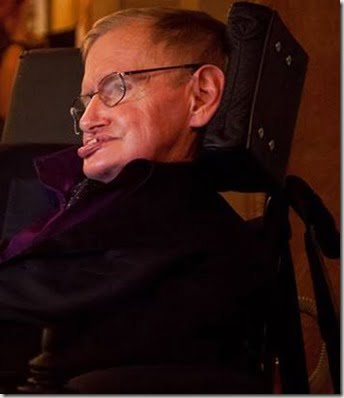 Stephen Hawking Theoretical Physicist, Director of research at DAMTP, University of Cambridge, and author of A Brief History of Time –the  bestselling book which has sold 10 million copies in 40 languages –might be paralyzed but that doesn’t stop him from his several endeavors. Most recently the 72-year-old talked about how artificial intelligence could spell the end of the human race. Professor Stephen Hawking was diagnosed with ALS, a form of Motor Neurone Disease, shortly after his 21st birthday. In spite of being wheelchair bound and dependent on a computerized voice system for communication Stephen Hawking continues to combine family life. He was married twice and has three children and grandchildren. He was married to author and educator Jane Wilde, with whom he fathered his tree children. Stephen and Wilde married in 1965, shortly after his diagnose. The couple separated after 25 years together and divorced in 1995. In a documentary about his life, Hawking highlighted Jane as his savior from depression. First child is son Robert Hawking born in 1967, daughter Lucy Hawking –a journalist and novelist – born in 1970 and third child is, son Tim born in 1979.

47-year-old Robert Hawking is a a software engineer who works with Microsoft and lives in the U.S. Stephen got married a second time to nurse Elaine Mason. Elaine Manson was hired to care for the famous scientist, by late 1980’s the two of them had grown close and Stephen left first wife and tied the knot to Manson just months after his divorce to Wilde. The couple divorce in 2006. He keeps busy in his research into theoretical physics together with an extensive schedule of travel and public lectures.