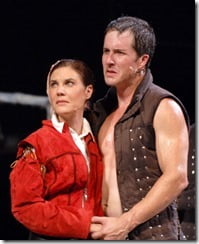 It’s a real shame to have lost one of the real pro actors, 77-year-old August Schellenberg was the real deal acting even in his last days. His previous work was just last year. He is survived by his wife Joan Karasevich and three daughters; let’s meet the three of them.

Joanna who was born in 1973, seems to be the only one following on her father’s footsteps on acting. In 2005 she appeared as the Ghost of Christmas Past in the Charles Dickens play “A Christmas Carol” at the Dallas Theatre Center, Dallas, Texas, USA.

According to her LinkedIn profile, Jo Schellenberg is a Data Specialist at TrizCom / Actress from the Dallas, Texas (Dallas/Fort Worth Area) and is in to the Marketing and Advertising industry. She’s been at TrizCom for the past four years in charge of Online PR and social networking of Press Releases.

Some of her credits on stage include “Why we have a body” 1999; “A Midsummer Night’s Dream” 2004; “The Count Of Monte Cristo” 2004; “The Swanne” 2004; “A Christmas Carol” 2009 and 2011. Romeo and Juliet (Juliet), Shakespeare Dallas; Rabbit Hole (Becca), Contemporary Theatre of Dallas; Why We Have a Body (Lilli), Echo Theatre. International: The Blyth Festival of Canada, I’ll Be Back Before Midnight (Laura); The Stratford Festival of Canada, Troilus and Cressida (Cassandra); The Factory Theatre, Aunt Hannah Meets Joe River (Caroline). Film/Television: Chase “Under The Radar” (Lisa Collucci); Haven (Fanny).

Reena is currently Manager at The University of Texas at Dallas according to her LinkedIn profile, she has held the position for the past nine years. Earlier tis years Reena Schellenberg, manager of events and communications for Academic Affairs and the Provost, was complimented by colleagues as “friendly, composed, polite and professional” in handling behind-the-scenes details for McDermott Scholars’ events. “She always seems to have a smile on her face and she goes out of her way to make sure others’ lives are easier,” her nomination said. Sophia is a retired IT User Services Trainer from the Montreal, Canada Area. She currently lives in Montreal, Quebec according to her Facebook profile. She has many pictures with her famous dad and enjoys playing golf.

In the past she held several positions at the Bank of Montreal working there for 14 years; throughout this time frame at Place du Canada, C.I.L. House and Head Office from 1976 till 1990. She then moved on to Montreal Trust/Scotiabank working there for 12 years as a Business Analyst from 1991 till 2003; form 2006 till 209 she worked for Hatch as an EDMS User Support. You can see her LinkedIn profile here.

Our prayers go out to them and the rest of their family. R.I.P August Schellenberg.