Shannan Click is the stunning model girlfriend of actor, Jack Huston. The couple hit the red carpet for the premiere of the movie, Ben-Hur –in which Huston plays Judah Ben-Hur.

Shannan Click, a 32-year-old model and mother of two, looked amazing while gracing her hubby’s arm –and judging she gave birth just a few months ago. 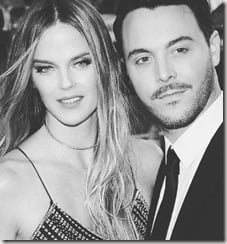 Her English beau was born Jack Alexander Huston on December 7, 1982. He comes from an acting family as the grandson of maverick American director John Huston and New York actress-model Ricki Soma, the son of Tony Huston, and the nephew of actress Anjelica Huston and actor-director Danny Huston. He thus seemed predestined for a career in entertainment.

According to his online credentials, he first stepped in front of the camera in his mid-twenties, scoring his breakthrough eith Gerard Malanga in the 2005 Edie Sedgwick biopic Factory Girl.

Huston played a recurring role on ABC’s quickly-canceled Eastwick, an attempt at updating The Witches of Eastwick for primetime television, and had a small role in a flashback scene in 2010’s The Twilight Saga: Eclipse. He then joined HBO’s Boardwalk Empire in a recurring role as the disfigured, mask-wearing Richard Harrow in season 1.

Huston also kept busy with movies, playing writer Jack Kerouac in the 2013 Kill Your Darlings. We later caught him on American Hustle, Posthumous, The Longest Ride, Hail Cesar! and Pride and Prejudice and Zombies.

But let’s get to the best part of being Jack Huston. That would be his partner since 2011, Shannan Click. The blonde with the endless legs, was born in San Dimas, California November 17, 1983. She began modeling at an early age after being discovered while at Huntington Beach.

Click became known for her work with Victoria’s Secret and her numerous Vogue covers, including Italian, French and Japanese Vogue.

She began her career by becoming the Face of the GUESS brand and took off from there.

She walked in the Victoria’s Secret show an unprecedented four times: 2008, 2009, 2010 & 2011. Prior to that she had established herself with a solid international runway career, walking for the likes of Miu Miu, Prada, Alexander McQueen, Luella Bartley, Yves Saint Laurent, Dior Cosmetics, Chanel, and Louis Vuitton.

The hot mama is currently signed to Women Management.