Sasha Lane is an up and comer actress, and is also the newest girlfriend of actor Shia LaBeouf!

Several reports have linked the two of being in a relationship after they’ve been caught hanging out in a number of occasions.

The actor was in a relationship with Mia Goth since 2012. He said to have fallen for his Nymphomaniac co-star as they worked on the controversial Lars Von Trier movie.

Prior to Goth, Shia dated Karolyn Pho for two years. It appears he can’t seem to push far from that two-year-relationship period.

Shia and Mia apparently had a dramatic split, reported by Page Six, back in June.

The 29-year-old seems to have a thing for his co-stars. According to the Daily Mail, Sasha Lane appears in the movie American Honey, and is believed they met while filming.

Sasha Lane and Shia sparked rumors since last month, most recently the new couple were spotted in matching casual style as they grabbed lunch together in Sherman Oaks, California.

Things are moving fast with Shia and they usually do –a source close to him revealed he and Sasha Lane are already living together.

The newcomer actress was completely unknown before Andrea Arnold’s upcoming film and after being linked to Shia, we only want to know more about her.

Though Sasha Lane doesn’t appear as sophistacted as Goth, Shia doesn’t seem to mind her style, in fact, they could easily exchange some of the same clothes. 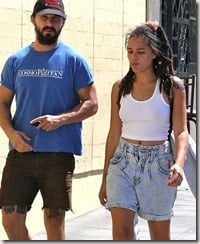 Sasha Lane is said to be close friends with Riley Keough –who is also in American Honey. Last July she was seen hanging out with Keough and Rosie Huntington-Whiteley at a Dior haute couture show in Paris.

Sasha Lane is completely fresh meet, according to her Facebook page,  she lives in McKinney, Texas, and works as a hostess at chain restaurant On the Border Mexican Grill & Cantina. It also reveals, she is originally from Houston.

She attended Frisco Liberty High School and was enrolled at Texas State University at some point. Her age is a total mystery but judging her looks, she could totally be still in her teens.

Shia appears in her Instagram page, and we can also tell you she celebrated her graduation 74 weeks ago, plus she seems very close to her borther, Sergio D’arcy Lane.

No doubt we’ll be hearing more about the dreadlocked brunette! Keep coming for updates!