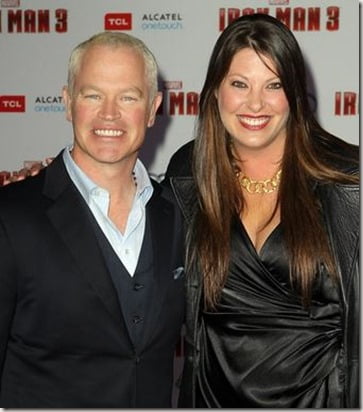 Did you happen to attend The Dan Band concert at The Roxy Theatre recently? If you did you might have seen a woman flying through the air! If you didn’t, no worries, we tell you all about the embarrassing incident.

Meet Ruvé Robertson better known as the wife of film and TV actor Neal McDonough and our topic for the present. According to TMZ reports it was none other than the wife of “Suits” star Neal McDonough who was flung off a the famous L.A. stage and it was captured on video!

According to the report, Neal’s wife was pulled from the crowd to dance when an attempted twirl went horribly wrong. Luckily for her, the lovely 6′ 3″ woman landed safely in her hubby’s lap and were almost no harm done other than a good scare. Ruve who took her hubby’s last name is mostly found under Ruve McDonough. They tied the knot almost 11-years-ago. The couple has been married since December 1, 2003. Her husband is perhaps best known for his appearance on Band of Brothers, a 2001 HBO mini series where he played Lynn “Buck” Compton. From 2002 to 2003, he appeared on Boomtown as David McNorris, and in Desperate Housewives, he played Dave Williams.

On the big screen, he has been noted for his recent appearance in films such as The Philly Kid, Company of Heroes, The Marine 3: Homefront, RED 2, Nurse 3D, The Prototype, and Agent Carter.

On TV, he is known for his recurring appearances on programs like The Incredible Hulk as Dr. Robert Bruce Banner, in Medical Investigation as Dr. Stephen Connor, in Traveler as Jack Freed, and in Justified as Robert Quarles. He recently appeared as guest on TV programs like Law & Order: Criminal Intent, CSI:NY, Perception, and Mob City. Although not much is known about the wife and mom of five, the couple has been a topic thought the years; whether shopping, strolling or just hanging out with their children. The Minority Report actor is seen with wife and children most of the time, they enjoy hanging out at The Grove in Los Angeles, or attending fundraising events for their daughter’s baseball team or picking pumpkins at local pumpkin patch in Los Angeles, Calif. The point is they have always been described as a happy, role model family.

And after five children a gal deserves a night out in the town! We are glad to know she is safe and sound! Don’t miss her hubby’s triumph reaction after he caugh her!