Roxy Horner is the new girlfriend of Hollywood actor, Leonardo DiCaprio. You won’t be surprise to know Roxy is a hot model since DiCaprio has a long list of model girlfriends.

It’s been a while since we’ve seen DiCaprio riding solo, but thanks to gorgeous Roxy Horner his single days are over.

Recent reports say the two were spotted out on the town in London after he won the Best Actor BAFTA on February 14. Though nothing has been confirmed just yet, sources suggest the two are definitely in the midst of something. The actor, was last dating Sports Illustrated stunner Kelly Rohrbach, the couple ended their romance in December 2015.

British bombshell Roxy Horner, is a top model represented by London management group and by one of the world’s top model agency premier model management. The 24-year-old blonde, green eyed gal is 5′ 8” bust 34B, waist 24, hips 34’’, shoe size 8.5 and dress size 8. She has full lips and keeps in great shape.

During an interview last year, she told hunger TV, she studied Moving Image at college in hope to become a film director or producer. Roxy also appeared on a 2015 film called X.

Horner is no stranger to dating in the entertainment business. In 2011 she was linked to musician Taio Cruz. She dated childhood pal and UK TV star Joey Essex two years later.

When not modeling, Roxy Horner keeps busy with her gals having a great time. She is very active on social media and keep her 51,000 followers on Instagram updated by documenting her outings.

According to the Mirror, Roxy and 41-year-old DiCaprio met a ‘while ago’ in Los Angeles and where thrilled after they coincided in London. 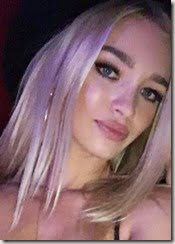 The skeptical say it would be a long shot for the couple to be actually a reality being so close to the Oscars 2016 ceremony. According to Page Six a not very happy, Horner responded to the DiCaprio rumors saying, “You can’t have a friend in the industry without people assuming it’s more than that . . . It’s a joke.” She added that despite the fact that they were both in the Chiltern Firehouse restaurant after the BAFTAS for a party but “FYI we all went our separate ways home, as friends do.”

The Mirror however reports, the pair did leave in separate cars, but also report Roxy Horner came back to his hotel room at 2:00 AM.

Will we see Roxy Horner at the Oscars’ red carpet? Comment below!