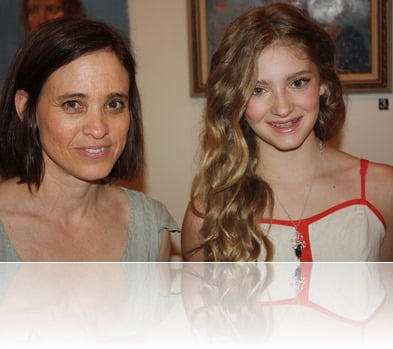 We have seen actress Willow Shields as Jennifer Lawrence’s little sister Primrose Everdeen in the Hunger Games, Willow’s next move is as a dancer in the 20th season of Dancing With The Stars. Her parents Rob Shields and wife Carrie Shields will be there to see the little daughter dance with pro dancer Mark Ballas.

At age 14, Willow Shields is the youngest competitor to ever appear on Dancing With The Stars, and Willow is ready to show she has what it takes to  win the mirror bowl trophy and her parents are supporting her every step.

To some of the readers who are not familiar with this young, talented actress, let us tell you that Mr. Rob Shields and his wife Carrie Shields welcomed twin daughters Willow and  Autumn Shields on June 1, 2000 in Albuquerque, Nеw Mexico, the girls joined older brother, River Shields. Willow is not the only child in the Shields’ household with acting skills, her siblings are in the business too. Willow’s will for sure have all the support of her sister and brother as well as her parents’. Carrie Shields, 46, was born Carrie Ann Lewis in California. Carrie attended Long Beach  Polytechnic High School and studied comparative literature at the University of New Mexico.