Renee Baio is the lovely wife of 53-year-old actor Scott Baio. Her hubby is better known for stealing the heart of every teen girl for his role as Cahchi Arcola on the sitcom “Happy Days.”

The beloved actor has been entertaining for over 30-years and went from acting to successful producer, writer and director.

The former teen idol announced through his Facebook page his wife Renee, has been diagnosed with a brain tumor and is asking for prayers and support from fans. 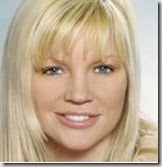 Peaches Renee’ Sloan and Scott have been married for 7-year, the couple tied the knot on September, 14th and she gave birth to daughter 7-year-old Bailey on November 2, 2007. She has another daughter, Kalyn LaNae’ Sloan from a previous relationship.

Besides being a wife and mommy Renee is also the president of the nonprofit she and her hubby created with the name of their daughter “The Bailey Baio Angel Foundation.”

They aim to raise funds through promotional activities and sales to support children and families affected with GA1 and other OA’s (organic acidemia metabolic disorders) through the creation of provisional support programs (including food, vitamin and emotional support efforts.)

She and her hubby became familiar with metabolic disorders after their own daughter was falsely diagnosed with GA1. On the website they described how she and Scott went through 10-weeks of living **** but were beyond lucky to discover their little angel was healthy.

Before she became a wife and mommy, the blonde used to be an actress and model, she was actually Pamela Anderson’s body double in Baywatch, funny since Pamela was one of the many women her now hubby dated back in the day!

We wish the couple the best!