Prof Tony Dyson, the British inventor who built the original Star Wars R2-D2 droid, has been found dead. The man who –built iconic non-human characters in movie history –sadly was discovered unresponsive inside his home on the Maltese island of Gozo after a concerned neighbor noticed his door had been left open, BBC News reports.

According to TMZ, police in Malta, where Dyson had lived since the 1990s, found Dyson’s body in his home after they were alerted by his girlfriend, who couldn’t reach him. No foul play is suspected.

Dyson had the task of building Artoo as a real life droid. The versatile Emmy nominated Film SFX supervisor was the creative genius at the helm of many of the biggest SCI-FI movies to date.

He worked in big films, including Superman 2, Moon Raker, Dragon Slayer, and of course, The Empire Strikes Back.

Dyson was commissioned to make eight R2-D2 robots for the film series. He said working on it was “one of the most exciting periods of my life”.

The look of R2-D2 was created by the conceptual designer Ralph McQuarrie who also created Darth Vader, Chewbacca and C-3PO.

Prof Dyson, who owned The White Horse Toy Company, was commissioned to make eight models plus the master molds and an additional head. 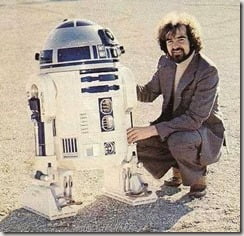 When it comes to Robot technicians Tony was quite unique, as well as building one of the most famous Robots ever, R2-D2 he also designed and built Robots for some of the largest electronic companies in the world, for example Sony, Philips and Toshiba.

You can also find examples of his creations on permanent display in one of the most prestige’s museums in the world ‘Smithsonian Institution’ and R2-D2 was one of the very first Robots to be honored in the ‘Carnegie Mellon University’ Robot Hall of Fame and Tony Dyson was also Nominated for an ‘Emmy’ for the Sony television commercial.

According to his LinkedIn profile, he created Dyson Designs in 2012. He was also a managing director at White Horse Toy Company Ltd.

Dyson was immensely proud of his work on Star Wars, and even set up an R2-D2 builders club in the UK so fans could craft their own astromechs.

Through the years, Tony Dyson became very close to the Star Wars fan community, he often made appearances at conventions and Comic Con’s –where he connected with people from all ages. One of his last Stateside appearances, was in January, when he showed at the Southern Fried Culture & Comic Con in Jackson, TN.

During his entire career, he encouraged others to follow their creativity.