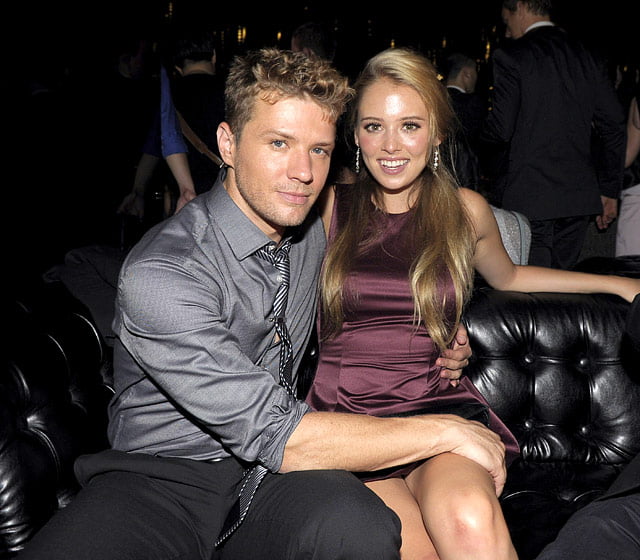 From San Diego California, 21 year old model Paulina Slagter has been dating Cruel Intentions star Ryan Phillippe on and off since December 2011. Although it seems now things might be just getting a bit more serious in the relationship since Paulina is often seen with Phillippe’s children and apparently the couple was seen together Thursday afternoon; but this was not your typical one on one time outing.

The couple spent the afternoon in a low key attire shopping for home furnishings at Restoration Hardware in West Hollywood. The leggy blond recently completed her third year of a Political Science and History degree at Los Angeles’s Loyola Marymount University and is expected to graduate this year. Slagter has been linked with Phillippe giving they’ve been spending much of their time together and seen in several locations; whether with his kids or Hollywood events, like when she accompanied Phillipe (via a discreet backdoor entrance) to STK L.A. Anniversary party in West Hollywood. Slagter, who in addition to being a college student is also a model and actress; she appeared in a small role on HBO’s Entourage when she was juts 15!

The young and pretty Paulina has apparently gotten cozy with Phillipe’s ever-growing family. She’s been spotted went grocery shopping with Phillipe and his son, Deacon, 9. In addition to daughter Ava, 13, Deacon is one of Phillippe’s two children with actress and ex-wife Reese Witherspoon. Phillippe has a third child, son Kailani, almost 1, with ex-girlfriend Alexis Knapp.

Paulina has a Model Mayhem profile where she says about herself:

hey my name is paulina, ..I’ve been modeling since three doing all sorts of things from barbie, to bratz dolls, recently i have been acting more, I’m represented theatrically by jet set agency, in la jolla, and LA models in Los Angeles The couple of blonds sure look hot together!