Alice Kim is the lovely and younger wife of Hollywood actor, Nicolas Cage. Her famous hubby apparently was in the right time at the right moment when he is seen in a video trying to restrain, Motley Crew singer, Vince Neil, after the latter got into a fight with a woman at a Las Vegas hotel!

Nicolas Cage began acting in his teens, he wanted to act so bad, he dropped out of Beverly Hills High School to pursue an acting career, making his debut on television in 1981.

Through her husband Alice Kim is related to the iconic film director, Francis Ford Coppola, who is Nicolas Cage’s uncle. He actually changed his name to separate his identity from that of his famous uncle and chose to pay tribute to comic-book superhero Luke Cage.

Cage has performed in a number of leading roles and is known to play a series of action thrillers but he actually began his career in teenage comedies, with his debut in Fast Times at Ridgemont High (1982, also featuring Sean Penn), followed by a leading role as a punk rocker in Valley Girl (1983).

By the early 90’s he was getting paid millions for his roles and in 1996, he won the Academy Award for Best Actor for his performance in Leaving Las Vegas.

As for his personal life, Nic Cage has been known for having a few relationships. Cage’s relationship with Kristina Fulton, a model, lasted several years, producing a son, Weston Coppola Cage, born in 1992.

He then went on to marry a total of three times. The first to actress Patricia Arquette in 1995; the second was a short-lived marriage to Lisa-Marie Presley, the only daughter of the late King of Rock and Roll, in August 2002- and most recently, he wedded his then 20-year-old girlfriend, Alice Kim. 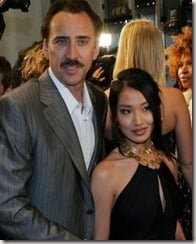 Alice Kim was born in 1984 as Alice Yung Kim, now she goes by Alice Kim Cage.

Alice Kim story is one of those ferry tales come true kind of thing. Sources say they met at a nightclub called Le Prive, where she worked as a waitress. The couple got engaged only a few months later after first locking eyes.

Alice Kim and Cage married on a private ranch in Northern California in 2004. She gave birth to their son Kal-El on October 3, 2005.