Ned Rocknroll famous wife is Hollywood actress, Kate Winslet. Nowadays, we are used to seeing Ned with lovely Kate Winslet, but there was a time where he was a stranger to all.

Ned Rocknroll was born Abel Smith 38-years-ago. He legally changed his name in 2008. Ned Roknroll is definitely not in the industry. He is actually the nephew of Sir Richard Branson and works for him. Ned works at his uncle’s space travel company Virgin Galactic and holds the title of Head of Marketing Promotion and Astronaut Experience.

Ned like wife Kate, has been married before. He was previously married to British socialite Eliza Pearson, the couple called it quits after two years. According to the Daily Mail, Ned Rocknroll

invited Eliza to Branson’s island Necker, she accepted the invitation and the pair stayed for a week.

Two years later in 2008, Ned popped the question and the pair had their official ceremony on the Caribbean island in August 2009. 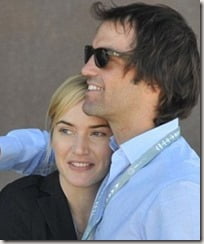 Ned separated from Eliza in 2011. That same year he and Kate were spotted together. It believed they met when Kate arrived at Branson’s vacation home on Necker Island in August 2011 with her kids and her then Burberry model boyfriend Louis Dowler. Kate definitely became tight with the family after she allegedly was among the guests who helped carried out Branson’s 90-year-old mother to safety, after a fire broke.

He and the Oscar winner tied the knot in a private ceremony in December 2012. She was previously married to film director Jim Threapleton with whom she shares a daughter, Mia Honey Threapleton born in 2000. She and Jim divorced in 2001 after a three-year-marriage. She then moved on to husband number two, director, Sam Mendes –whom she married in 2003, the same year she gave birth to their son, Joe Alfie. She divorced Mendes in 2011.  Ned Rocknroll made his red carpet debut at the 2012 Golden Globes.

Kate –who gained fame in the blockbuster ‘Titanic’ and has also starred in ‘Little Children,’ ‘The Holiday’ and ‘Mildred Pierce –gave birth to the couple’s first child Bear Blaze Winslet, on December 2013.

Kate has kept her private life private, but in 2015, she told WSJ magazine:

“No one really knows why my first marriage didn’t last; no one knows why my second didn’t. And I’m proud of those silences … Thank God for Ned — really. He’s just so incredibly supportive, and he’s so much fun. He’s absolutely everything to me. And to all of us.”