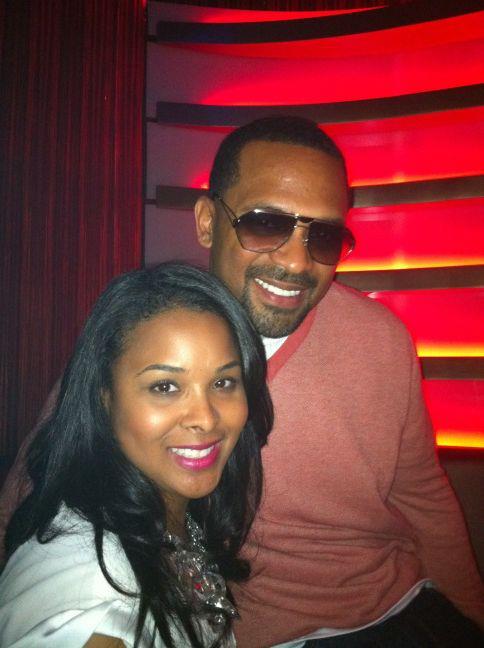 Meet Mike Epps’ beautiful wife Michelle Epps aka Mechelle Epps or Michele McCain, she was with her husband at the premiere of Haunted House 2 and joined him at the after-party at Lucky Strike in Downtown L.A where a woman who claimed of having a  prior romantic relationship with Epps said the actor punched her in the face.

43-year-old comedian Mike Epps is the proud father of his beautiful daughters Maddie and Mariah from his marriage to his stunning wife Mechelle and Bria from a previous relationship.  in 2011 a woman in Atlanta demanded a paternity suit from Epps who she claimed was the father of the baby she gave birth to in December, 2007.

The birth if the child came five month after Mike got married to the formerly Michelle McCain in July, 2006.

Mrs. Mechelle Epps met her hubby in the set of The 2003 film Filming Temptations where Mechelle had a small role as Epps’ girlfriend. Two years later Mechelle played Patricia  in The Teenage Kevorkian and Delilah in the short film The Hoodling which she also produced. The film had  an Honorable Mention at the 2010 Los Angeles Movie Awards. In 2011 Mechelle starred in the television series The Game and 35 and Ticking, she appeared in the 2012 film Basketball Wives The Movie and starred in four episodes of Behind The Scenes as Fantasia and Belinda.

Mechelle had a cameo role as reporter in The Bold and The Beautiful and played Angela in the 2012 t.v series MisAdventures of A Hollywood Housewife. Last year you probably saw her a church woman in the film Hollywood Chaos.

Mechelle is actively involved with Hoops for Hope L.A. as well as in her and her husband’s foundation the Michael & Mechelle Epps Foundation.