A terrible tragedy struck the life of Meg Strange and her baby daughter who will go up without her father television director Adam Strange who was killed by a great white shark in New Zealand. 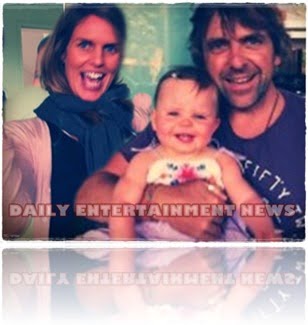 46-year-old television and award winning short film director Adam Strange was swimming  in Muriwai Beach about 200 from the shore when a white shark about 14 ft. long attacked and killed him.

“All of a sudden… we saw the shark fin and next minute, boom, attack him then blood every where on the water,” he said.

“He was still alive, he put his, head up, we called him to swim over the rock to where we were. He raised his hand up, and then while he was rising his hand up we saw another attack pull him in the water.

“He came back up, his head was on the water… then we notice he was already dead.

Adam and his wife Meg Strange got married on September 1st, 2011, she gave birth to her adorable baby daughter Indigo 2010. Meg and her family lives in Muriwai Beach, New Zealand.

Our thoughts and prayers are with  Adam Strange’s wife Meg, their daughter and the rest of their family and friends throughout this sad time.