Meet Micheline Connery aka Micheline Roquebrune; the second wife of actor Sean Connery, famous for his role for his as James Bond.

Micheline isn’t as well known as her longtime husband, Sir Sean Connery however being married for so long to her famous hubby the now 91-year old Micheline has gained her star recognition. She and the Scottish tied the knot in 1975.

Micheline was born in 1929, she is a Moroccan-French painter and became a stepmother for Connery’s son Jason Connery from his previous marriage to actress Diane Cilento.

Micheline married the actor soon after meeting him; she also had three children of her own from her previous marriages, Olivier, Micha and Stephane.

Sean was very close to all of Micheline’s children but especially Stephane. They used to play golf together regularly with Sean’s son Jason.

Sean Connery divorced his first wife in 1973 and married Micheline Roquebrune a self-taught artist in 1975. The two met at a golf tournament in Morocco and soon got married in Casablanca. The couple was seen together at the holidays or red carpet parties. But the leading man’s leading lady still seems to have picked up on Hollywood’s obsession with plastic surgery! 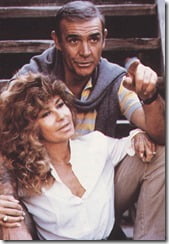 A website that displays her work, says Micheline Roquebrune Connery enjoys the ritual of painting and uses her art as an outlet of expression and self-fulfillment. The French-born artist had a preference for painting people instead of landscapes saying people was more interesting and showing her fascination for relations between people. Micheline’s artistic interest included producing plays, writing and of course painting. Her works once described as surprisingly quiescent and revealing. Her first painting exhibition was in 2000.

She started painting at 23 and her vibrant, realist style has been developing ever since. She painted first and foremost for herself but with a deep responsiveness to others

Micheline Roquebrune Connery has developed an approach to her art that is perhaps best characterized as one of luxe, calme et volupte.

According to an interview she was in a convent from the age of seven to fourteen. As a child, she lived in Tunisia where she was surrounded by painters and sculptors at her parents’ house. She posed for Russian, Alexandre Roubtzof, who was staying at her house almost permanently.

You can read more about her interview here.

No doubt a real-life Hollywood affair. Now the couple that has gone through a lifetime together seems to be going through some rough times facing health issues; Micheline’s legendary husband has had many health setbacks but now media reports say he might be losing his memory due to Alzheimer’s.