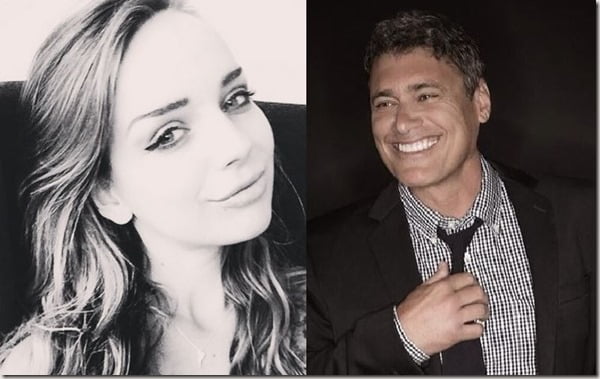 Cuban-American actor Steven Bauer, known for his iconic performance as Manny in “Scarface,” is “living it up” with 18-year-old girlfriend, Lyda Loudon!

Their relationship certainly raise brows as their mouth-dropping age difference of 39-years does not seem to bother the couple one bit! The mismatched pair was spotted recently hanging out in L.A. But caught our attention back in July.

The Scarface andRay Donovan star stepped out with his much younger girlfriend at the Magic in the Moonlight premiere on July 21.

After three marriages, Bauer shook us all when he got back on the dating scene with Lyda. Steven’s last marriage to Christiana Boney, 51, ended in 2012 and now the actor seems to be pretty happy with new found love 18-year-old, Loudon.

Pretty Lyda has yet to post a picture with her man on social media but that why paparazzi’s exist. So if you don’t mind us asking, just, who is the brave girl? For starters, she is the daughter of former Missouri Senator John Loudon, 47, and talk show host Dr. Gina Loudon. (Notice her father is younger than her beau). Lyda has four siblings, Lily and Jack, Samuel, and Bo. She might be young but decisive and accomplished are two words that describe her well. She is also founded the L3 Foundation, which is a nonprofit organization that is “dedicated to educating, informing and empowering Millennials with the tools it will take to turn America’s future around.” We can tell where Lyda gets her looks from, her Dr. mom is quite the eye-candy. Dr. Gina has 2 Masters Degrees and a PhD in psychological fields (Psychology [WWU]; Counseling Education [SLU]; Human Development [FGU]; Human and Organizational Systems [FGU]). She is co-author of Ladies and Gentlemen: Why the Survival of our Republic Depends on the Revival of Honor. She is credited as one of the “100 Founding Members” of the Nationwide Tea Party movement, Founder of Arizona BUYcott, and originator of the field of Policology–the nexus of politics and psychology. Lyda’s interests include travel, film, music, law, water sports, yachting, film, tennis, guns, film & pageantry. According to her personal info, at age 14 years old, Lyda Loudon founded her organization, Tea Party Youth, the world’s first Tea Party youth movement. Now 18, Lyda is working as a journalist, spokeswoman for several organizations, student, and public speaker. She is an editor of The Reality of the Times, as well as a writer and columnist on education, psychology, music, culture and politics on numerous other websites and blogs.

Lyda who is also interested in “creating successful feature films containing subtle undertones of the messages that need to reach the Millennial generation” must be getting some great notes from her boyfriend huh!

Could this be Lyda acting out at her parents? or would you say is the real deal?

We know Bauer is looking good for his age but shouldn’t this be a crime or something? What do you think?

You can read about her parents reaction and eventual acceptance of their daughters relationship here.