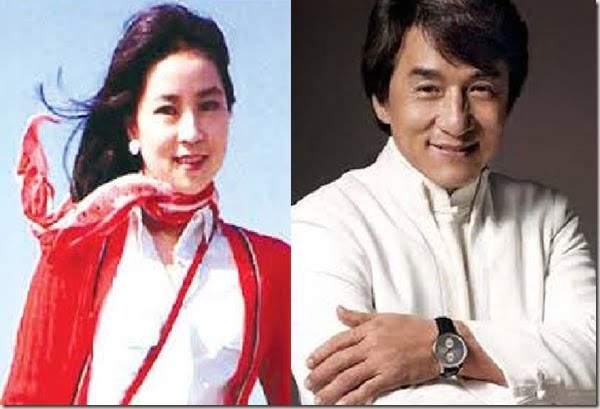 A well respected actress in the Chinese film industry, Lin Feng-jiao; the wife of 32 years of iconic actor Jackie Chan is making recent headlines. The couple who is very private is currently facing some unpleasant times with the arrest of their only son, Jaycee Chan.

Her husband release a statement addressing the incident and to say they are both angry at Jaycee is an understatement; a fragment where Jackie mentions his wife reads:

As a public figure, I feel very ashamed; as his dad, I’m very sad and disappointed. But the person who feels heartbroken the most is his mom.”

61-year-old Lin Feng-jiao was in the house when her son with movie star Jackie Chan, Jaycee, was taken away in handcuffs in a crackdown on drugs, reported Apple Daily yesterday. Her family’s economic situation forced her to drop out of school when she was just twelve years old. Seven years later, she landed a starring role in the film Chaozhou Nu Han.

She won a 1979 Golden Horse Award for her work in The Story of a Small Town. She made over 100 films in Taiwan and Hong Kong. Ironically she was a movie star way before her husband Jackie Chan. She married Jackie Chan on December 2, 1982, the day before she gave birth to their son, Jaycee Chan Cho-Ming. She left the show business right after her marriage with Jackie. It is not the first time the couple are involved in a major scandal. In October 1999 a TV actress and former Miss Asia 1990, Elaine Ng Yi-Lei revealed to the Hong Kong media that she had had an affair with Jackie Chan and was pregnant with Jackie Chan’s child. Facing the strong demands for truth from the media and his fans, before publicly admitting his affair with Elaine Ng Yi-Lei, Jackie Chan called his wife who lived in the United States with their son to tell her the truth and to beg her for forgiveness. He described that conversation with his wife to his close friends as the worst moment of his life. Surprisingly, his wife was calm and supportive. She said:

“You don’t have to tell me anything. Me and our son can handle ourselves. Don’t worry about us, we are fine, go and settle your problem, don’t say anything “

Can you imagine how much relief Jackie Chan felt and how much he appreciated his wife for forgiving him in this way? Today they are still a happy family, or trying to be one.