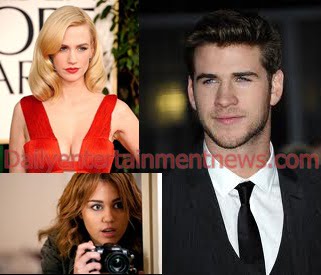 Liam showed up at the Chateau Marmont hotel without his bride-to-be and got cozy with January Jones, eye-witnesses claim they kissed.

“It looked like they had some hot chemistry,” an eyewitness at the event tells Star. “They were all over each other – and they even kissed!”

Liam was also spotted getting into the backseat of a car with Jones. Meanwhile his fiancee arrived solo to the Grey Goose Pre-Oscars Party and  to the Elton John AIDS Foundation bash on Sunday night. According to sources, Miley Cyrus has been all over the place lately, from NYFW to the Oscars parties.

It’s sad, Miley and Liam were one of few stable Hollywood couples.

Liam was born on January 13, 1990, in Melbourne. He is the younger brother of actors Chris Hemsworth and Luke Hemsworth. Following in the footsteps of his older brothers, who went into acting in their teens. Liam is best-known for playing Gale Hawthorne in The Hunger Games. He has also been the lead in films like The Last Song and The Expendables 2. He will also star as Ali Baba in a 3D production of Arabian Nights (2014) and will reprise the role of Gale Hawthorne in The Hunger Games: Mockingjay (2013).

The Australian actor played Miley Cyrus’ love interest in the 2010 movie The Last Song, soon they started dating, and Liam appeared in Cyrus’ music video “When I Look at You.” After three years together, the couple announced their engagement in June 2012.