Her husband has established himself as one of today’s top comedic stars. You may recognize him best as Leslie Chow, the gangster in The Hangover Trilogy.

Tran and her famous husband have been together for years and make one solid couple. Ken has been a fervent and vocal Trump opponent and most recently we saw him alongside Joel McHale hosting Fox’s New Year’s Eve Special.
The 51-year-old funny guy can currently be seen on the American version of The Masked Singer, the singing competition where he serves as a panelist.

Keep reading to find out more about Jeong’s personal life, including his wife Tran, their ups and downs and more.

Growing up, Ken never though he would one day be on TV and followed the career path of most people. He became a real life, doctor.
The son of South Korean immigrants earned his medical degree from the University of North Carolina at Chapel Hill. He completed his residency at Ochsner Medical Center in New Orleans and later moved Los Angeles where he practice medicine for years and did stand-up comedy on the side.
He actually began following his passion by doing stand-up while in medical school.

That’s right, Ken was once a practicing physician, however he left the stethoscope behind to take on acting. During an interview speaking about making the transition from the medical field to acting he revealed

I always had a passion for performing, so even when I was in college. I was pre-med. Yeah, a lot of people don’t know this, but I was doing a lot of theater as well and I had gotten bitten by the acting bug in college. I never did any acting in high school or anything like that. I didn’t know I even had it in me to perform. So, I was definitely a late bloomer, and I didn’t know where I was going to go with this. All I knew was I just had a deep, deep love of performing. I felt like I had an aptitude for it, but more importantly, I had a passion for it.

Tran’s husband is also well known for the TV role of Ben Chang –a character he played on the sitcom Community from 2009 until 2015. He also wrote, produced and starred on ABC’s show, Dr. Ken –a show which is close to home for Ken who is a former physician.

After performing regularly at comedy joints such as The Improv and Laugh Factory, he landed small TV roles and later made his film debut in Judd Apatow’s Knocked Up as Dr. Kuni.

Additional credits for Ken include Transformers: Dark of the Moon, Role Models, Pineapple Express, Despicable Me and Despicable Me 2.
He also played Wye Mun Goh in the hit film, Crazy Rich Asians; which became the first major Hollywood movie with an all-Asian cast in 25 years.
In addition, he’s made notable appearances on popular television shows such as The Office, Entourage, Curb Your Enthusiasm, to name a few. Ken also went onto released his own comedy especial on Netflix in 2019.

But behind every great man, there’s a greater female. That would be Ken’s wife, Tran. Ken himself confirmed it during an interview saying about his beloved spouse

Oh yeah, no, I run everything by my wife and she was definitely very much in favor for it…my wife’s been very supportive of it, and I even showed her the end product as well. We’re partners, you know, I could not do this without her. She again is another unsung hero.

According to US Magazine, Tran Jeong also approved of her husband’s naked scene on The Hangover saying

“This will be the feel-good movie of the year. Every guy will go home feeling good about himself.”

He has been a happily married man for the last 17-years. Meet the lovely Tran Jeong below.

Tran Jeong was born Tran Ho, it was her who gave Ken the final push so he could pursue his true passion full time.
Her husband’s comedy special on Netflix was titled ‘You Complete Me, Ho’ -as an odd tribute to his wife. Tran Jeong is of Vietnamese origin and she happens to be a physician who practices family medicine. According to People, she works part time at the HMO.

She met Ken while the two attended medical school. They dated for a while and have been husband and wife since 2004.
Dr. Tran is also a breast cancer survivor, she was diagnosed in 2008.

Tran Jeong found a lump while she was breastfeeding. It came back Stage 3 triple-negative breast cancer, a very aggressive variant of breast cancer. Around the same time, Ken was offered a role in The Hangover, and it was Tran who urged him to take it.

She is now currently free of cancer for over 10 years now. Ken revealed to People magazine in 2019 that Tran was cancer free saying

…And to be cancer-free is, of this kind of cancer, it is a medical miracle. It’s a miracle.

Ken Jeong and his lovely wife, Tran have been together for nearly two decades. During that time the couple has welcomed two children together. 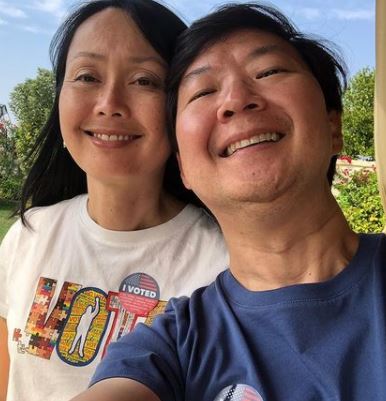 Speaking about his daughters and if they see him on the screen, Ken revealed

It’s so funny, they love “Community.” They love every episode of “Community,” and they don’t like my character, like when they see my character, it’s like they want to fast forward it, and even my daughters actually ask me, “Am I insulting you if you’re not my favorite ‘Community’ character or if we watch episodes that don’t feature you?”

I think my wife has done the most amazing job of just kind of, and I’m on board with this too, that we tell our kids, “Look, I have an odd job, and the job is just slightly different but the principles of life is the same.”