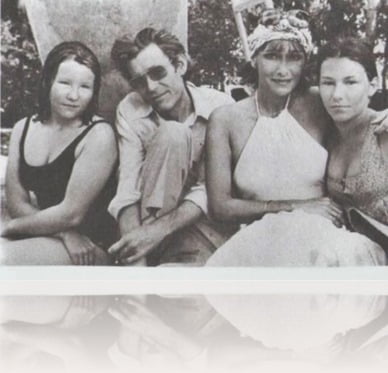 Peter O’Toole passed away on December 15, 2013 at the age of 81 following a long illness, he may be gone but  forgotten, Peter leaves a legacy in the lives of his beloved children son Lorcan and his beautiful daughter Kate and Patricia O’Toole.

Peter O’Toole was the father of his three beautiful children, son Lorcan from his relationship with the American former model Karen Brown  and his two daughter Kate and Patricia from his only marriage to actress Sian Phillips. Two of Mr. O’Toole followed his steps into acting Lorcan and his daughter Kate. Kate was born in 1961 , Stratford-upon-Avon, Warwickshire, England, UK to Peter O’Toole and Sian Phillips, she studied at North London Collegiate School and then went to study drama at Circle in the Square in Ireland, she then enrolled at Yale School of Drama after her father suggested after working with Yale student Jodie Foster. Kate’s acting career began at the age of 8 when she starred as Amelia More in Laughter in the Dark, her next role came in 1987 as Clare in Tales from the Darkside.

The in 1996 she had a small role in the t.v series Karaoke and appeared in Get Well Soon in 1997, in 1998 she starred as Susan Maxwell-Scott in Bloodlines: Legacy of a Lord and portrayed a chemist in dancing at Lughnasa.

In 2000 she starred as Miss Dalahunty in  the film Nora and as Dr. Eleanor Wiseman in the mini series No Tears. In 2002 she starred in Possession and in 2004 as Dr. Fay in the t.v series The Big Bow Wow.

Kate O’Toole  was the  casting director in the 2005 film The League of Gentlemen’s Apocalypse, she starred along her father in the Tudors.

Last year she appeared in 6 episodes f the television series Titanic: Blood and Steel and also in My Phony Genie, this year she was in the television miniseries Privates a Eileen Babcombe. As for his younger sister, Patricia there is really so few out there, she was Patricia Rosina O’Toole just a year after her older sister Kate, she was named after her aunt Patricia O’Toole. After her parents divorced in 1979 after 19 years of marriage, she and Kate remained close to their mom.