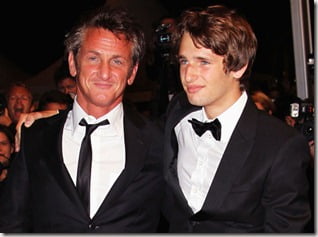 Seems like Hopper Penn is following his dad Sean Penn’s footsteps, and we are not talking about acting this time, but about altercations with paparazzi.

19-year-old Hopper Penn got into an altercation with an African-American photographer in Beverly Hills while heading into a medical building on Bedford Drive with his dad. The unidentified paparazzo said that they both argued and then Hopper pushed him. Hopper also made racial and anti-gay statements while yelling:

Sean Penn kept his head down and walked in without a word. It was all caught on tape. Cops happened to be nearby at the time and heard the commotion. The photographer said it was just a verbal dispute and he didn’t want to press charges against Hopper.

“I was accosted by paparazzi and made to feel like an animal, threatened and under attack, but that does not condone my own actions. I deeply regret my choice of words”

Hopper Jack Penn was born on August 6, 1993. I bet you didn’t know that he was named after Dennis Hopper and Jack Nicholson!

Her mother is actress Robin Wright, and he has a sister named Dylan Frances who was born in 1991. Their parents divorced on July 22, 2010, reaching a private agreement on child and spousal support, division of assets, and custody over their underage son.

Hopper attended Marin Catholic High School and after that he went to Redwood High School for sophomore year in 2008.

His father, Sean, was arrested for assaulting a photographer on a film set, he was sentenced to 60 days in jail in 1987, of which he served 33 days. He also was sentenced to three years probation for kicking a photographer in 2009. Sean Penn also made headlines when he hit his then-wife Madonna in the head with a baseball bat during a dispute in 1987, he was charged with felony domestic assault.