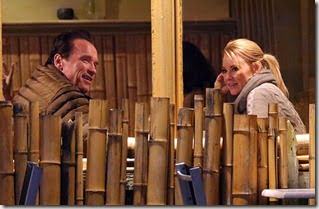 Arnold Schwarzenegger is back in the dating game. The actor and former governor was spotted Friday night on an intimate date with physical therapist Heather Milligan at Babalu restaurant in Santa Monica, California. There, the couple was spotted laughing and smiling while enjoying dinner at a table by the window, and left together in the actor’s car. They were seen together twice over the weekend.

On Sunday, two days after, 65-year-old Schwarzenegger and much younger looking Heather Milligan were spotted at Fig restaurant at Fairmont Hotel near the beach in Santa Monica, California. Both were more casual, he was wearing a long-sleeve shirt and blue jeans and his companion in leggings and a hoodie over a T-shirt, with her hair pulled back in a ponytail.

Heather Ann Milligan, who’s 27 years his junior (that would make her 38 years old), is a shapely southern California physical therapist and has many NFL players as clients.

Milligan was born on November 09, 1974. She graduated from Loveland High School in 1993. Before she moved to California she lived in Las Vegas, NV, Dallas, TX, Denton, TX, and Fort Collins, CO. Her relatives include Susan Milligan, Donovan Milligan, Casey Milligan.

She was married to Apichai Haisupa. Records show Heather and her former husband selling a 3,866 square ft. house in Northwest Las Vegas in 2007.

Heather Milligan was covering her tracks Tuesday, avoiding multiple messages left by the Daily News and also deleted a birthday tweet to Schwarzenegger sent back in July:

“(Milligan) is the best PT I’ve ever had,” Ramses tweeted earlier in July. “Need to find away to put her in my suitcase for training camp>Thx Ramses:-)”

The “Terminator” actor told a German newspaper last month that he is still in love with ex-wife Maria Shriver.

“We’re not fighting any war,” he was cited as saying. “I still hope for reconciliation; I still love Maria.”

Arnold and Maria separated in May 2011, after 25 years of marriage. He cheated on her wife with the couple’s housekeeper and fathered a son with her.