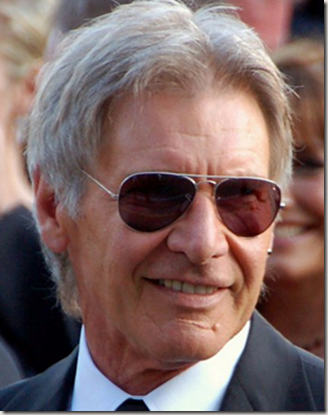 Legendary actor Harrison Ford better known for playing the role of Star Wars’ Han Solo next to Carrie Fisher and Mark Hamill as well as the Indiana Jones character, suffered an accident when his plane crashed late yesterday.

The 72-year-old probably relived one of the many action stunts from his movies when he was forced to make an emergency landing at a golf course in L.A. shortly after take off. Ford has been in over 20 movies but has never won an Oscar; he’s been married three times, is the father of five children, one of them by adoption and has three grandchildren. He was first married from 1964-1979 to chef Mary Marquardt with whom he fathered two children, sons Ben and Willard Ford. Ben is also a chef like his mother and Willard is into the clothing business being the co-owner of Ford & Ching showroom. Ford’s second wife is award-winning screen writer, Melissa Mathison 64, with whom he was married for 21-years from 1983–2004. The couple have two children together, daughter Georgia and son Malcolm Ford. Both Georgia 24, and brother Malcom 27, have followed into their famous father’s footsteps by becoming actors. Malcolm is also a musician with band The Dough Rollers. Ford’s third and current wife is 50-year-old actress Calista Flockhart, known for her role in the TV series Ally McBeal. The pair met in 2002 and tied the knot in 2010, it was the first marriage for her. Together they are the parents of adopted son Liam.

According to reports, the beloved actor is expected to make a full recovery.