Miss Great Caruso has been spotted spending some relaxing time with actor Jake Gyllenhaal! The pair pictured in workout gear, seemed stress free next to each other as they spend time next to a luxurious pool. The Daily Mail reports the couple –who appears to have treated themselves to a well deserved break –are in Amalfi, Italy.

The 34-year-old showed off his buffed shape, result of 15-extra pound he had to gain for his role as boxer Billy Hope in movie Southpaw. Jake has at least two other projects; upcoming flick Demolition  and most recently new movie, Everest.

The couple –who’s known each other for years –was later seen taking a bike ride, sightseeing the local area. 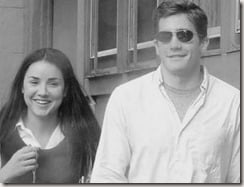 31-year-old Greta is no stranger to the Hollywood field, she’s the daughter of CSI: Miami actor, David Caruso –a.k.a Horatio Caine –and his second wife Rachel Ticotin.

During an interview, she revealed about growing up:

I grew up around a truly eclectic group of artists, actors and storytellers, which not only made for insane and wonderful family gatherings, but inspired me to get – and stay – interested in a great many things: art, history, movies, music, travel, politics. I think it’s that interdisciplinary nature that ultimately drew me to the food world.

Greta has two other younger siblings by way of his father’s relationship with former girlfriend Liza Marquez.

According to her LinkedIn, the pretty brunette graduated with a BA, Humanities from Yale in 2006. She has worked with the Rome Sustainable Food Project and Edible Schoolyard Project.

In 2011 she became the co-founder and Foodmaker lead at Good Eggs, a San Francisco-based company with a mission to grow and sustain local food systems worldwide.

You can read a full interview on her, here.