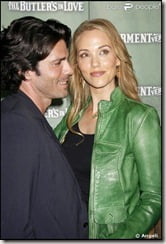 No wonder people say that if you have somebody’s same interests, there are many chances you might bump into someone who’s right for you…and this was the case for Elizabeth Berkley and Greg Lauren who met in a dance class in 2000. And now…he is a participant on season 17 DWTS!

Greg Lauren married Elizabeth on November 1, 2003, at the Esperanza Hotel in Cabo San Lucas. Berkley formally changed her name to Elizabeth Berkley Lauren. On March 5, 2012, Berkley announced she was expecting her first child in the summer. On July 20, 2012, son Sky Cole was born. Berkley gave birth just 8 days before her 40th birthday.

He is also an artist and advices her on what roles are good for her. As an example, she set up a self-help program in 2006 for teen girls called Ask-Elizabeth after her husband commented on the number of girls who came to her asking for advice and joked that she should have her own column. She regularly meets with young girls to discuss different issues and topics and to help them with any problems that they are going through and speaks of her own troubles in the past.

He has had exhibitions as follows:

Art From The Heart, The Chase Foundation, Beverly Hills, CA