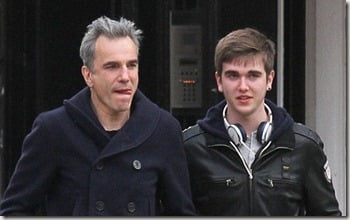 Though the actor is very reclusive, he was seen enjoying a public day out in Manhattan with his eldest son Gabriel, who definitely looks a lot like his three-time Oscar winner father and could end up being as tall as the 6’1 Lincoln star. He even mirrors his dad’s body language!

Daniel is based in Ireland these days, so probably he made the visit specially to see his oldest son who lives with his mother.

Gabriel-Kane Day Lewis was born on April 9, 1995 in New York City. He is half British and Irish on his father’s side and French, Algerian-Kabyle and German on his mother’s side. Gabriel’s grandparents are Nicholas Blake and Jill Balcon.

Gabriel participated in the classic Broadway musical Guys & Dolls in 2011, performing as Sky Masterson, “the coolest high roller of them all”. The musical was performed by Transition Year students at the secondary school, is set around a group of gamblers in 1950s in New York, and has many famous songs such as its title song Luck Be a Lady.

He also appeared as himself in the 2002 movie Adolphe.

Her mother, Isabelle, who had a six-year on-and-off relationship with the actor, revealed that Daniel had dumped her by fax when she discovered she was pregnant with Gabriel and initially made no payments for his child, but it seems that he regrets that situation and now wants to have some father and son bonding.

When talking about parenting, Daniel once said:

“It utterly changed my life. I don’t think there’s a parent on this earth who would give you a different answer. I experienced this vast unknown in the period leading up to me becoming a father… I don’t know if I can describe my feelings about being a father in real life. In real life, I have sons. Sons are different. Sons are a pushover. Daughters can be quite difficult. At least, that’s what I hear.” While the filming of Lincoln, the family moved to the US. Daniel’s younger sons went to Montessori school in Wicklow town while Gabriel attended secondary school in Bray.

Find Gabriel-Kane’s profile on IMDb here. We found one Gabriel Day-Lewis on Facebook, do you think this is him? click here.