Mary’s son was catapulted to fame along, with his co-stars, for portraying Mike Wheeler -who is best friends of Gaten Matarazzo, Noah Schnapp and Caleb McLaughlin’s characters in Stranger Things.

Prior to Stranger Things, Finn had previously been seen in guest spots in Supernatural and The 100. He has since landed movie roles making his debut in the 2017 horror film remake It. He most recently appears on The Turning -an adaptation of Henry James’ novella ‘The Turn of the Screw’
In addition to his acting, Finn is also a musician. He plays bass and guitar and was a member of the band Calpurnia from 2017 to 2019. His new band is called, The Aubreys.
Finn was actually introuduced to music by his mother Mary -who taught Finn to love and understand music. 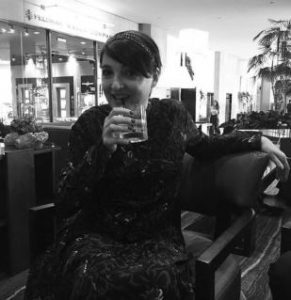 Mary Jolivet was born in Vancouver, Canada; to a French dad Lawrence Charles Jovilet; and Trish Jovilet. She has one brother, Timothy.
Mary studied visual display and design at Langara College. In the early 1980s, she also attended Institut Catholique de Paris, where studied French culture.

According to her LinkedIn, during many years she served as the assistant of her husband Eric. Later she began to work for the brand Dormouse Design, which creates clothes for kids. At Dormouse Design, where Mary has been working since the mid 90’s -she does freelance window display and merchandising and is a self-employed collage and mixed media artist. Interestingly enough, on her professional profile Mary Jovilet also lists her most important title, that of a, mother.

Mary Jovilet tied the knot to her husband Eric in the mid 90’s. Eric Wolfhard studied art and policy in the University of British Columbia. He later earned a Law degree from the University of Toronto.
Mary Jolivet and her husband have welcomed two sons. Their first born, Nick -Finn’s older brother -was born October 21, 1997. They welcomed Finn on December 23, 2002; in Vancouver, Canada.