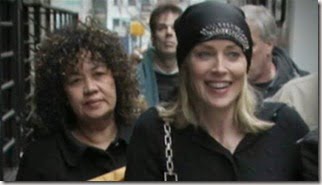 Sharon Stone was sued for wrongful dismissal and racist abuse by her former Filipino nanny Erlinda Elemen last year. Stone has counter-sued her. The star said in the suit filed in Los Angeles Superior Court this week, that Erlinda owes $9,500 of a $12,500 loan she made to her in 2010.

The actress hired Erlinda as her children’s nanny on October 2006. She worked as a live-in nanny until February 2011 and was head-nanny. According to her, the actress was a tyrant of a boss, she criticized her Filipino heritage and religious beliefs, banning her from reading the Bible in the actress’s home.

Elemen also said Sharon ordered her not to speak to her kids because she did not want them to talk like her. Stone denied the allegations and her attorney said:

“This is an absurd lawsuit that has been filed by a disgruntled ex-employee who is obviously looking to get money and way she can.”

A judge has claimed the former nanny has provided enough evidence to support her charges of harassment, failure to prevent harassment, retaliation and wrongful dismissal.

But now Stone came with a brand new lawsuit of her own, alleging Erlinda owes her money. In her suit, the actress claims that the nanny stopped making loan payments in January 2011, just one month before Elemen was fired. Stone is suing for the remaining debt plus interest.

Stone’s lawyers said that comments by the actress did not amount for harassment. A tentative trial date is set for July 30.

“All we have is that Ms Stone made comments about Filipino food, Filipino accents,” said lawyer Daniel Gutenplan.