Jameson Burt is the boyfriend of stunning Italian actress, Emanuela Postacchini -who made an appearance at Harvey Weintein’s trial.

Jameson’s girlfriend was brought in as a witness earlier this week. According to reports she took the stand to back up testimony by Jessica Mann, who accuses Harvey of rape, despite having engaged in a relationship with the disgraced movie mogul for years.

Emanuela Postacchini was born on July 7, 1991 in Ancona, Marche, Italy. She speaks five languages as a result of having attended a linguistics school.
She moved to Milan, Italy at age sixteen. She made her screen acting debut in 2009, when she appeared on an episode of the Italian series Squadra Antimafia – Palermo Oggi.

She began grabbing attention with a number of roles on various Italian television shows, including Don Matteo and Distretto di Polizia. She later landed roles in English-language films like 2013’s Third Person and 2016’s The Man Who Was Thursday -starring opposite Liam Neeson.
According to her IMDb, she had roles in The Alienist (2018), Who Is America? (2018) and The Last Ship (2014).
From her social media, we can tell the stunning brunette is currently in a romantic relationship with musician, Jameson Burt. 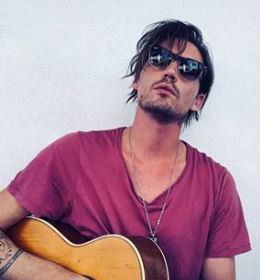 A California native, Jameson Burt is a singer, songwriter & performer. He was discovered in LA by famed producer and art-rock pioneer ‪Rupert Hine.
Before embarking in a solo career, Burt was the frontman for alt rock band Mount Holly. He also previously sang backup with the popular “melodic rock” band Ecco Ecco, formerly Steve Carson Band.

According to the LA Times, Burt’s interest in music began at age 12, when his dad, an avid rock fan and hobby guitar player, placed a 1960-something Yamaha acoustic in his hands and encouraged him to start playing.

Jameson Burt signed with BMG/Sony in Berlin in 2015. Since then he has released 3 albums and numerous singles, recorded at the landmark Henson (A&M) Studios, and has toured extensively throughout the U.S., Europe, and the U.K.
In March 2019, he released his album ‘Tropics’ and most recently he released the single, Crush which came out this January.
Check out his website here.