You might have known 27-year-old former Disney actor Zac Efron has a younger brother, but did you know the younger Efron happens to be all grown up and let’s just say, he has nothing to envy his older sibling.

Zac posted a picture of the two of them, revealing his younger brother is as much of a hottie as he is! 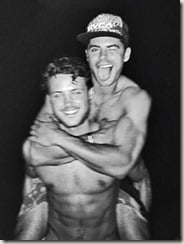 Besides the brotherly love, the image posted via Instagram, shows off Dylan’s chiseled six-pack.

When Dylan was about 12-years-old he wrote a poem about his actor brother. Zac tweeted his little brother’s work-of-art titled “A Brotherly Thing”

“My brother is a movie star,

And is only sixteen.

He doesn’t have a job yet.

Still, he thinks he is the queen,”

If he Lost we at a show,

I bet he would not care a bit

He wont even try to look,

But my mom would throw a fit.

Yes, he does have a good side,

That shows up once in a while.

He watches my sports

Which puts upon me a smile.

I guess he isn’t that bad,

If I think about it twice.

He helps me with my homework.

If there’s any hatred going on,

It is a brotherly thing.

If we fight no one gets hurt;

Brothers have to fight, I think.”

23-year-old Dylan might not be in the industry but Zac’s fans sure think he should, the silly picture has over 400k likes! Dylan sure has the same dreamy eyes and adorable smirk as his brother!

Both are the children of middle-class father who worked as an engineer for a power plant, and their  mother worked as a secretary.

A shout out to Dylan and his good looks!

If you had to choose who would you pick and why!