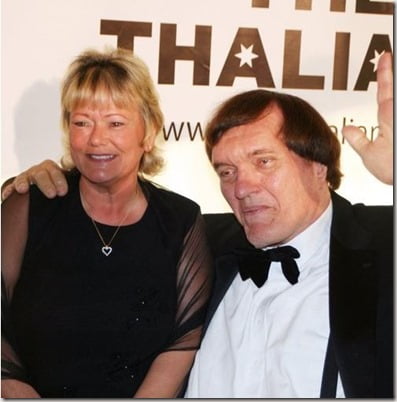 It saddens us to hear that Richard Kiel, who played as the iconic Bond villain Jaws in The Spy Who Loved Me and Moonraker, has passed. As a tribute to the 74-year-old star we want to take a closer look at his remarkable performances and family life.

Cornered by his appearance, the Detroit native appeared in numerous jobs which were focus on giants, intimidating henchman, bayou swamp monsters and steel toothed villains. Before he rose to fame and always  pushed by his physique he held jobs as a night club bouncer, a cemetery plot salesman and a math teacher. Family for the actor was spelled “Diane Rogers,” his wife of 40-years. The actor was previously married to Faye Daniels from 1960-1973.

In 1974 he tied the knot to Diane, with whom he fathered 4 children. According to online sources, Diane belongs to the class of 73’ of Southeast Bulloch High School in Brooklet, GA; from 1968-1969 she also attended Charlton County High School in Folkston, GA. Diane’s husband towering at outstanding 7′ 2″ tall was best known for playing Jaws, a giant and seemingly unstoppable assassin with steel teeth who battled James Bond in The Spy Who Loved Me (1977) and Moonraker (1979). Such was Kiel’s popularity with movie audiences, that his character was brought back for the next Bond outing Moonraker. However, audiences were quite split on opinions when Kiel’s “Jaws” character changes sides near the film’s conclusion and assists 007, Roger Moore, in saving the Earth. Over the next few years, Kiel appeared in relatively non-demanding comedy or fantasy type films taking advantage of his physical stature and presence. Kiel then decided to try his hand behind the camera and co-wrote and produced, plus took the lead role, in the well received family movie The Giant of Thunder Mountain (1991).

In 1992, Richard was in a car accident and suffered a severe head injury, which affected his balance. After the accident, he used a cane to walk. In his 2002 autobiography Making It Big In The Movies, Richard explained that his VERY tall height was due to a hormonal condition called acromegaly.

He also made memorable performances in The Longest Yard and Happy Gilmore. More recently, four years ago, Richard voiced the character Vlad in the popular filmTangled.

Diane’s husband reportedly died in hospital in Fresno on Wednesday. The hospital have not released the cause of death, citing client confidentiality. He is survived by his lovely wife, 4 children and 9 grandchildren.

The world has lost a great talent. Our prayers are with Richard’s loved ones during this very difficult time.