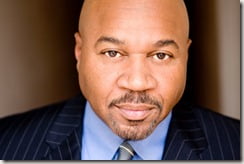 You must have seen David Reivers whose a familiar face from many national TV commercials and episodic series. But we all must see him in this season’s DWTS premiere! Do you think daddy moves the tush like cuttie Corbin Bleu?

David Reivers was born on November 21, 1958. He is an American actor who casted together with his son Corbin on Disney channel movie Jump in! He also appeared in High School Musical 3 as Mr. Danforth. Both times he played as daddy in the movies he worked with his real son.

Mr David Reivers is married with Mrs. Martha Reivers. She is Italian and he is Jamaican. Mr. Reivers is a well known actor prodominantly in NYC.

David is Scorpio and is 6′ (1.83 m) high. In his private life, people close to him describe him as someone loyal, passionate, resourceful, observant and dynamic. He is fiercely independent. He is also able to accomplish anything he puts in his mind to and he won’t give up. He is also perfectly suited to being on his own. He likes to be in control.

Some of the movies and shows he has been in are: Pennies, Poseidon, My Name Is Earl, Gilmore Girls, After the Sunset, JAG, 24, Down the Barrel Luxury of Love, Charmed, Malevolent, Apple Valley Knights, Touched by an Angel, Roswell, Cursed, Titus, Buffy the Vampire Slayer, Ally McBeal, City of Angels, Judging Amy, Felicity, The Thirteenth Year, Home Improvement, Brooklyn South, Reading Rainbow, Malcolm X , Gabriel’s Fire”, Say No to Strangers and Forbidden Fruit.

You can check his FB here.