Charlotte Long is the journalist who is accusing Hollywood actor, Jim Carrey of making inappropriate comments.

Charlotte claims the Golden Globe winner said to her during an interview, she was the only thing he had left to do on his ‘bucket list’

The incredibly akward comment took place during Long’s interview of the actor about his role in “Sonic the Hedgehog” -Long who is an experienced journalist asked Carrey about his career while making a comparison with his character in the movie, she asked

“In the film, Sonic has a bucket list. I was wondering, after all you’ve done in your career and in your life, is there anything still left on your bucket list?”

Long in shock replied “I don’t know what to say to that!”

As they both laugh, Carrey says “Just own it” 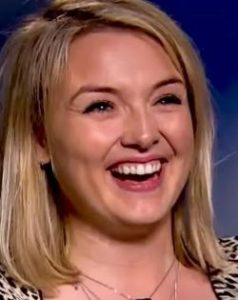 After Long posted the interview on Twitter, users slammed the actor for his risque comment. Users also noted Charlotte’s professionalism in handling what some people labeled as flirty joke.

Charlotte Long is a journalist currently employed at Heat Magazine. According to her social media she is described as a Senior Entertainment Reporter at Bauer Media. She also writes on her bio “All views my own or borrowed from people I find interesting”

According to her LinkedIn, the blonde UK native attended Gumley House Convent School. In addition, she is listed as a Film Editor & Broadcast Journalist at Entertainment News, 7 Digital. She previously worked as a freelance journalist in the UK at Global, 107 JACK fm Berkshire, The Huffington Post, UKRD Group Ltd, Metro.co.uk and Radio Jackie. She began her career as a trainee reporter at News Associates and SW Londoner. She was previously a personal assistant for WILLIAM AND SUZUE CURLEY LIMITED. She also served as Marketing and Journalist intern for Lincs FM Group.