Birgit Kroencke, was married to Sir Christopher Frank Carandini Lee for over five-decades. The British actor, singer and author died after being hospitalized for respiratory problems and heart failure, reports say.

Her husband of 54-years was known as the master of horror, the veteran actor gave life to characters in iconic movies such as Dracula, The Wicker Man through to James Bond and the Lord of the Rings trilogy.

Birgit who is a former model and actress from Danish origins, decided to announced his death four-days later in order for the family and friends to be informed first, according to The Guardian. 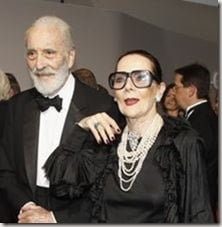 Her husband and father of her only daughter passed away at 8:30 am on Sunday morning at Chelsea and Westminster Hospital in London.

80-year-old Birgit, started her career in modeling, according to Wikipedia, she modeled for years and later transitioned to acting. She starred in films with the names of art by Gitte Kröncke andGitte Lee. According to her IMDb page under “Gitte Lee” she performed in productions including; 1962 film Rikki og mændene , 1961 Een blandt mange and the 1981 The Salamander.

At the age of 26, she and Christopher were joined in matrimony, the couple produced one child, daughter: Christina Erika Lee who is now 52-years-old.