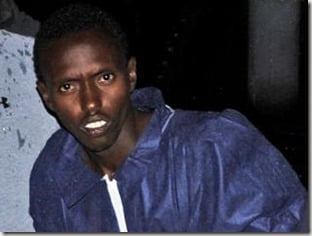 The picture of a pirate? Abdulwali Abdukhad Muse,Abdul Wali Muse or Wal-i-Musi is the sole survivor of the four pirates who hijacked the MV Maersk Alabama in April 2009 and then held the captain for ransom.

Abduwali Abdukhadir Muse the son of Adar Abdurahman Hassan, claims that his story hasn’t been told. Abduwali Muse was sentenced as an adult to 33 years in prison, as Captain Phillips says, though his age was a controversial issue in the trial. According to a prosecutor, “he gave wildly varying ages for himself but finally admitted he was 18.” Since his arrest, he has tried to commit suicide multiple times, according to his attorneys. The director of the documentary about Muse says that the Somalian declined Sony Pictures’ many attempts to meet him, having decided that they “were just going to make him a bad guy.” Will he ever get to say his side of the story? Abduwali Muse is now in residence at the Federal Correction Complex at Terre Haute, Ind. On the big screen he is portrayed by Barkhad Abdirahman. Radar Online reports exclusively the horrific conditions he has suffered for the past several years through his relationship with Lesotho filmmaker Kaizer Matsumunyane who is currently developing a film about Muse called “The Smiling Pirate”

After living in less than what is consider human conditions for almost a year, he finally answers the letter of Kaizer, telling him about is **** on earth, including suicide attempts, depressive disorder, severe PTSD and anxiety disorder, being threatened that his family would be arrested as accomplices and much more.

In one of his recent letters, Muse writes

“I am feeling much better today. Yesterday, Tuesday, Oct. 15, 2013 began the second day of my holiday, Eid Mubarak. I really had a wonderful time of praying, games and food … Man was it a wonderful day. Just for a moment I felt free… I almost forgot I was locked away. That to me was really a wonderful feeling. All praise due to Allah.”

But Radar reports that ever since Captain Phillips hit theaters, life began to change again for Muse. In a recent email he wrote,

“Since the movie has come out, things seem to be even more difficult than to become easier [sic]….Man I tell you it is such a problem that it is really crazy. I really feel sad sometimes with the way they treat me, but after now four years, soon five, I am starting to figure things out with them and they do not make me feel so hurt and hateful as I used to, because I am getting used to them.”

The “Smiling Pirate” who first intrigued Matsumunyane when he saw a news report on Muse’s incarceration that showed the man grinning in chains and handcuffs, however putting up a smile; is ready for production.