Li Wenliang, is the Chinese doctor who first warned about the newest killing virus outbreak, currently known as the coronavirus.

Doctor Li is said to have died in the early hours of Friday from the virus. The confirmation of his passing comes from a series of conflicting statements about his condition from the hospital and Chinese state media outlets.
Reports of his death began to surface this week, the state-run Global Times said Li Wenliang had died at Wuhan Central Hospital on Thursday, however numerous reports later said he was instead, critically ill.
Li Wenliang who is survived by his wife and one young child -had been in the hospital since early January, fighting the deadly infection.

Inital reports about his death sparked “national grief” as he is said to have raised the alarm about the virus but was silenced by authorities and ended up contracting it himself. According to the BBC, Dr. Li warned fellow medics about the virus late in December but was told by police to stop making ‘false comments’ 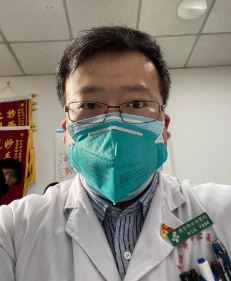 Li Wenliang, an ophthalmologist, posted his story on Weibo from a hospital bed a month after sending out his initial warning.
He had noticed seven cases of a virus that he thought looked like Sars. He sent a message to fellow doctors in a chat group warning them to wear protective clothing to avoid infection.
A few days later he was accused of “making false comments” that had ‘severely disturbed the social order’. Local authorities later apologised to Dr Li.

He took to his social media to reveal that on January 10th he started coughing, the next day he had a fever and two days later he was in hospital. He was diagnosed with the coronavirus on January 30th.

34-year-old Li Wenliang was a married man and father of one son, his wife is currently expecting their second child.
The coronavirus has now killed more than 560 people and infected 28,000 in China.