Yfke Sturm, a 33-year-old Victoria’s Secret model is currently fighting for her life as she was injured in a surfboard accident that put her into coma!

Yfke Sturm was on a holyday last week, riding a ‘Jet Surf’ on the southern coast of the Italian island of Ischia. Reports say the blonde fell into the water, hitting her head. When she attempted to come back to shore she was struck by another jet surfer.

The beauty –who became a first time mom last month –was flown to a Naples hospital with severe spinal and head injuries.

The London-based model, wrote on Facebook alongside a photo of her baby boy.

“Words cannot describe how excited we are for the arrival of our son Alexander!!”

Yfke Sturm was born in Almere, Flevoland and was scouted by a model agency in 1997.

The blonde model is best known for working for Calvin Klein, Marc Jacobs, Chanel and many more of the major fashion labels. 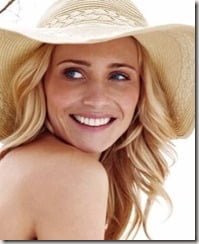 According to her Facebook page info, her career took off when she was just 15 when she won the 1997 International Elite Model Look Contest. At age 15, Yfke Sturm was into sports but following her success in the modeling competition, she has never looked back.

The seasoned model has worked with renowned photographers and graced the covers and inside pages of the worlds most familiar magazines, including: Vogue, Elle, Marie Claire, Cosmopolitan, Glamour, Harpers Bazar, Allure, Vanitifair, W, Surface, D-Magazine, Esquire, Amica and Arena.

Like many, she transitioned her modeling status to a career in TV as the host for Holland’s Next Top Model. In 2009, she wrote a book called Yfke’s Models Secrets. She’s also an ambassador of the Dutch Red Cross Foundation and started “Yfke 4 Kids” in collaboration with the Red Cross.

According to the Daily Mail she was previously married to businessman Imad Izemrane for three years, they split in 2010 and Imad Izemrane is allegedly in a relationship with a French model named Constance Jablonski.

Latest updates on Sturm say doctors are concerned she may be at risk of paralysis. She has been placed on a ventilator.