Sarah Snyder was seen with her beau, at the Gypsy Sport fashion show during Spring 2016 MADE Fashion Week at Milk Studios on September 15, 2016 in New York City. The story doesn’t end there, during the show, they were caught sharing a tender kiss while Smith held on to Sarah Snyder’s legs. The real show came after while the roamed around New York!

The lovebirds were seen smooching again and again, while Sarah held his face in her hands, Smith gave his lady a good old’ backside a squeeze.

Sarah and Jaden seem like they couldn’t get enough of each other and after the PDA, they romantically stood still in an embrace. 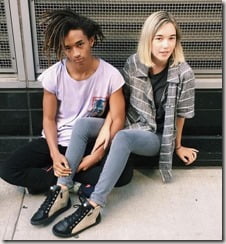 The couple sure has been spending much time together, about eight weeks ago, Sarah Snyder posted on her Instagram the photo above and captioned it:

He’s obviously really happy to be with me

According to E! The two reportedly started dating earlier this summer after first being spotted together at the premiere of Pitch Perfect 2. They were later photographed in July holding hands in New York City.

It was thought Jaden had been dating Hunger Games star Amandla Stenberg –with whom he attended prom last May.

However, is obvious the only lady in his eyes, is the pretty 19-year-old model. But, it’s not all good news, according to a report in Diaryofahollywoodstreetking, Sarah Snyder might not be a good influence on the young Smith.

The pretty gal was allegedly arrested after she faced accusations of stealing a $16,000 Hermes Birkin handbag earlier this year. She was charged with felony Grand Larceny.

Any thoughts on the young lovers?