Dylan’s stunning girlfriend has amassed an impressive online following thanks to her makeup tutorials. The influential YouTuber and beauty guru recently came out on her YouTube channel as transgender after allegedly being blackmailed.

Born March 2, 1994; Nikkie de Jager went through her very own transformation going from male to female -before becoming a YouTube celebrity.
She revealed in her coming out video she always felt like a girl and began wearing dresses by age 8. She began taking hormones at 14 and had made the full transition by age 19. Nikkie also said she had always wanted to share her identity with susbcribers but never found the time until someone wanted to take her story to the press.

Since becoming popular aorund 2015, she has gained millions of followers around the world due to her makeup advice channel NikkieTutorials.
Nikkie recently became engaged to her boyfriend, Dylan Drossaers -who is often featured on her social media. 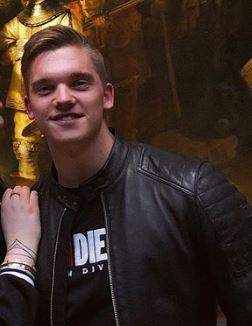 Dylan Drossaers and de Jager began dating in the summer of 2018. Dylan proposed during a romantic trip to Italy in August 2019 and a months later she gushed about already having a date for their wedding. According to reports, Dylan has been supportive of her decision to come out. In fact, she mentioned him on her coming out video saying
“I’ve never met anyone like him. He is truly the most kindhearted man in my life ever. ”
She also told during an interview that it was Drossaers who gave her the strength to post the video, promising her that they would “get through it.”

According to his social media, Dylan Drossaers is a native of the Dutch city of Eindhoven. He attended school at De Rooi Pannen Eindhoven. Is not exactly clear what Dylan does for a living, however is safe to say he often collaborates with Nikkie. He and Nikkie starred in a video in which he does her makeup and she calls him Mr. Tutorials.
His identity appears somewhat secretive and he doesn’t seem to be very active on social media -despite being in a relationship with a social media star. Though he appears in numerous images on Nikkie’s Instagram, Dylan Drossaers doesn’t appear to have his own profile.