Jeff Magid is the lucky boyfriend of actress and model Emily Ratajkowski. Many would kill to be in his shoes to be able to get close to the stunning 25-year-old.

Emily, the “Blurred Lines” music video model, has reached a new level of **** as she bares it all for an exclusive photo shoot with Harper’s Bazaar. The London born actress shows off more skin than ever as she lays out her perfect shaped body on top of a horse.

You’ve probably heard of Emily Ratajkowski’s portrayal of a lovelorn college student in Gone Girl. She is also an outspoken feminist, whether addressing body-image issues on Lena Dunham’s site, Lenny.

She can also be seen in Robert D. Siegel drama Cruise, which follows a young Italian-American from the ‘wrong side of the tracks’ who falls for a Jewish girl from Long Island. 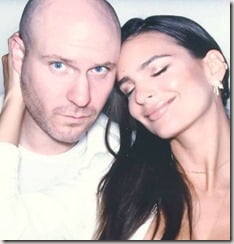 As for her personal life, well, she has been taken for some time now.

Musician Jeff Magid and Emily were first linked together in 2014. Things certainly look to be going well for Emily Ratajkowski and her guy as they are often seen stepping out for coffee in Los Angeles.

Sometimes couples are hard to understand, and some will agree that Jeff Magid and Emily make for one big mismatch. Ok, so we are saying that based only on looks but come on!

They have been together for over a year now, so we’ll give him a chance.

The **** star, who split from her boyfriend Andrew Dryden, stepped out with Magid in December 2014, while in Miami. At the time eyewitness said the new couple were “cozying up together” at the Bombay Sapphire Artisan Series Finale party on Dec. 5 and “holding hands.”

There is a LinkedIn, under the same name that says Jeff Magid is an “independent music professional” and “experienced, handsome, well liked and handsome.” ?? You can see it for yourself here. He also makes the important clarification (and NOT the guy dating the model).  It’s a little suspicious but he really might not be Emily’s guy since his company’s website, RBI Productions, states Jeff Magid founded R.B.I. Productions in 1999 and also says Jeff has been involved in the music industry since 1976, which would make this Jeff Magid, too old for our Emily.

Accoridng to Emily’s Jeff Magid Facebook page, all we know is that he went to Brown University and resides in Los Angeles. Many have no idea what she sees in him, but hey, as long as Emily is happy right.