Zoe Scholefield, an English young woman has made public a ridiculous list her boyfriend sent her on how to behave during a night out.

Zoe made the revelation on her social media after her boyfriend cheated on her. He allegedly sent her a list of things she wasn’t allowed to do on an outing -after he, ironically was unfaithful to her. She exposed her boyfriends ludicrous demands on Twitter captioning her post: “Funny how my ex sent me stuff like this then has the audacity to cheat on me.”

Zoe who is from Wakefield, West Yorkshire; shared the text with the list from her controlling ex, which included things such as 1) Don’t dance like a s**g like in Reflex. 2) Don’t get too drunk. 3) No boys and if anyone comes up to you and talks to you, you tell them you have a boyfriend. “8) You let me know everything that happens and be ready to explain stories. 9) Always send me photos of front and back of what you are wearing so I can approve and say whether or not I think you should wear it.” 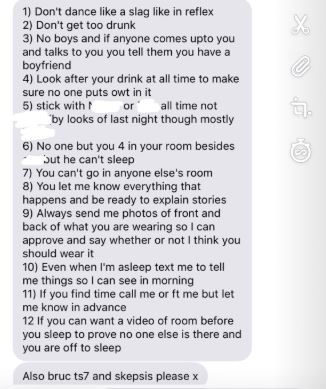 Zoe was supposed to follow this list of rules while she was on a night out. She received the set of the 12 rigid rules after he asked her then boyfriend which band he wanted to see in videos from a musical festival she was attending.
Her post has since received more than 34,000 likes with numerous users labeling her ex as toxic, dangerous, sociopath, controlling and paranoid. One user wrote “The fact he sent anything other than ‘enjoy it’ is a red flag” Another wrote “Your ex needs to attend a mental health hospital”

It is unclear how long Zoe actually did follow his demands.

According to social media, the gorgeous young lady currently lives in Leeds, Kent. Pretty sure she’ll have no problem finding someone new.