Yelyzaveta “Liza” Naumova is the stunning wife of businessman Igor Fruman -who has been identified as a key players in the Ukraine scandal and is currently facing charges.

Yelyzaveta’s husband has been named a close associate to Trump’s personal lawyer, Rudy Giuliani and has been accused of helping Giuliani, run his ‘shadow Ukraine agenda’
As a result, Fruman and another man, Lev Parnas; were arrested for allegedly violating campaign finance law in an effort to “buy potential influence with candidates, campaigns, and the candidates’ governments.”

Fruman and Parnas are said to have set up meetings with current and former Ukrainian officials—and allegedly devising a plan to profit off of the corruption and chaos that President Trump was creating. Global Energy Producers (GEP) is the liquefied natural gas company that Parnas and Fruman controlled and which they use to make donations. However, Prosecutors say GEP was a shell company with no real business.
Fruman, a Belarusian-born U.S. citizen -was also one of the donors to a pro Trump fundraising committee who helped Giuliani’s efforts to investigate Joe Biden. 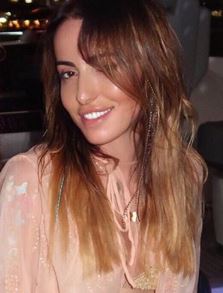 53-year-old Igor who has homes in Florida, is also a married man with a few children. He and wife Yelyzaveta “Liza” Naumova were happily married for a number of years, however reports say Yelyzaveta Naumova -who is the mother of the couple’s children -filed for divorce in 2017. The former couple is currently estranged from each other.

According to Page Six, their divorce hasn’t been easy -documents show he sought several orders to get his wife randomly drug tested — while she got his finances subpoenaed from American Express and JP Morgan Chase Bank. They have a hearing scheduled later this month.

Yelyzaveta “Liza” Naumova is originally from Odessa, she and Igor tied the knot in 2005. During their marriage, the couple welcomed three children together including daughter, Gisele Fruman.