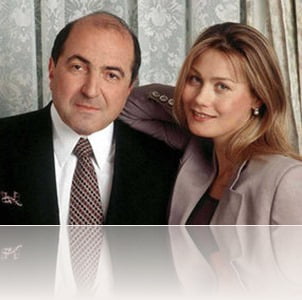 Exiled business Russian man Boris Berezovsky was found dead at the bathroom at his Ascot home, some aid he took his own life others said he died of natural causes, his death was confirmed by his son in-law on Facebook, Boris’ last girlfriend was Yelena Gorbunova.

65-year-old Boris Berezovsky was found dead at his Surrey Home on March 23rd, where he had been living for more than a decade, he had been suffering from depression and financial trouble, he loss his  billionaire lawsuit against former partner Roman Abramovich this year, as well as the lawsuit filed against him by his former girlfriend Yelena Gorbunova who said he owned her million from the profits of the sale of their home.

Boris Berezovsky married twice, first in 197o to Nina Korotkova with whom  he had two daughter Elizaveta and artist (b. 1971) and Ekaterina (b. 1973). Boris and Nina divorced in 1991, his second wife was Galina Besharova was a math teacher when he met her in 1981, they got married in 1991 and had two children together son Artem born in 1989 and daughter Anastasia, sadly their honeymoon was over after two years although they remained married until 2008. His last partner was Yelena Gorgunova mother of his two younger children, 17-year-old Arina and 16-year-old Gleb. Boris and Yelena were never married, but they lived together for eighteen years. The couple and their teenage children lived together in their 173-acre  Wentworth Park Mansion in Surrey. There is not much information about Ms. Gorbunova, besides that she is 43, split up from the Russian last December, but she showed up by  his side during his trial against Abramovich. Yelena said that Boris promised her that he would give her 5-million-pound of their Surrey home worth 25 million pounds after he sold it, but he never gave her anything instead he gave it to his creditors, so she request that up to 200 million pounds ($317 million) of Berezovsky’s assets be frozen. Yelena also said Boris told her she was the owner of two French properties that he was selling at the moment, she was afraid she was not going to get money of that sell either, the judge stated that only the assets at risk, namely the French properties, should be frozen, means Berezovsky couldn’t sell them  and get any money from them until his trouble with Yelena was resolved.

Regarding the Wentworth Park sale, Mann wrote that if Gorbunova was right and “the 5-million-pound bird has already flown”, then there were no funds on which any injunction could bite.

Noting the French properties were held through “obscure offshore structures”, he said there was a risk Berezovsky could manipulate matters to deprive Gorbunova of what she said she was entitled to.