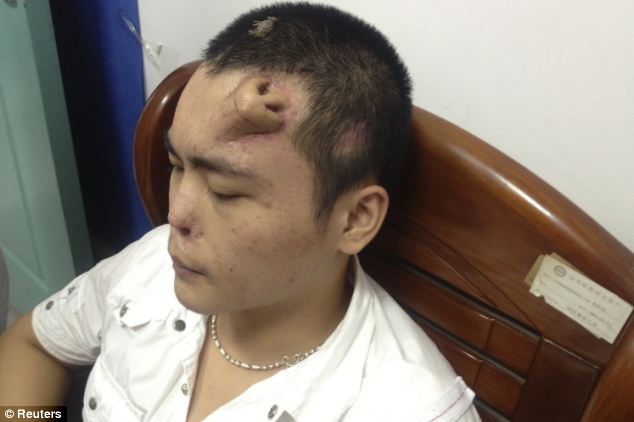 A young man, identified only a Xiaolian, has become an overnight sensation with his pictures on the internet for the whole world to see. The reason is simple, he has a nose on his forehead.  But what is really amazing is how this happened.

In August of 2012, Xiaolian was in a car accident that would change his life forever. The injury to his nose was neglected and became infected. The infection destroyed to cartilage of his nose and there was no hope of his ever looking the same. Then, doctors from the Fuzhou, Fujian province of China decided it would be possible to sculpt him a new nose. They used cartilage from Xiaolian’s ribs, and using skin tissue expanders, formed a new nose. Doctors decided that the best surface on which to grow the new nose was his forehead. The process is now almost complete. According to the Daily Mail, surgeons have said that “the nose has developed well and that transplant surgery will be carried out soon.”

This is not the first time this kind of thing has been done. Earlier this year, a British businessman lost his nose to cancer. A new nose has been growing on his arm, although the method of construction was quite different and more complicated. But if successful it could lead to huge help for car crash victims, wounded soldiers and victims of diseases. According to doctors, growing a nose takes approximately three months and the procedure is often safe.

In this case, plastic surgery isn’t just about looking “pretty”, it’s about getting a life back again and living in a normal way.