William Syvin was married to former Charles Manson follower and current inmate, Leslie Van Houten. The 66-year-old has spent most of her life in prison after being initially convicted at the main Charles Manson trial.

Leslie Van Haouten was sentenced to death but a year later all death penalties in the state were commuted to life imprisonment. She was convicted over the 1969 deaths of Leno La Bianca and his wife Rosemary.

Now reports say, William Syvin’s ex-wife could be released from jail. It looks like the 20th time is the charm one for Van Houten, who’s been denied parole 19 times before.  She said after hearing she was parole approved

“I don’t let myself off the hook. I don’t find parts in any of this that makes me feel the slightest bit good about myself”

Leslie Van Houten has been incarcerated since December 1969, she has spent 47-years in prison. Her final sentence came in 1978 after three trial. Leslie Van Houten was born into a middle-class family in Southern California on August 23, 1949. The second child of Jane and Paul Van Houten. She had an older brother, and an adopted younger brother and sister, who were Korean.

During her teens she began experimenting with drugs and also ran away briefly with her boyfriend to the Haight-Ashbury neighborhood of San Francisco. She allegedly had an abortion and later returned to finish high school. After graduation she became a hippie.

In late 1968, she met Charles Manson and his “Family,” moved onto their ranch and became infatuated with Manson. 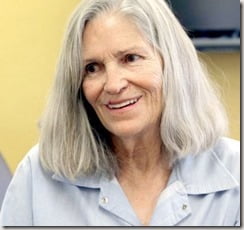 Leslie Van Houten, was 19 at the time she held down Rosemary La Bianca while someone else stabbed her and she later admitted she stabbed the woman after she was dead.

Leslie Van Houten was the youngest member of the ‘Mason family’ –all of them under the influence and control of Charles Mason committed heinous crimes. The La Bianca killings came a day after other followers of Charles Manson carried out the grisly murder of actress Sharon Tate and four others.

Van Houten was not involved in the Tate murders, however according to Tate’s sister, Debra –who has fought against the release of Manson and his followers including Van Houten –she did not show remorse for years. 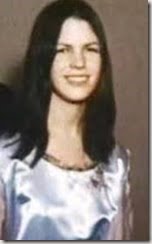 William Syvin, Van Houten’s husband of only two months, is also known as Bill Cywin. According to records they were married from August 1982 until October that same year.

The story between her and William Syvin had been used aggressively against her at every parole hearing.

She and Williams –a fellow convict –began corresponding in 1981. After he was released he began to visit her and they eventually married in a small prison ceremony. They were allowed to have conjugal visits. It was discover later, completely unbeknownst to Leslie, William Syvin had been planning a prison break for her and a prison matron’s uniform was discovered by the police in his apartment.

Leslie immediately cut off all contact with him, divorced him, and never saw or heard from him again.

Not one of her prosecutors ever tried to say she was in on this plan in any way and they admitted they knew she was innocent of any knowledge of her husband’s attempt. But they never let her forget it. Her “bad judgment.”