Ahmad Khan Rahami has been caught by NYPD in connection with the Saturday explosion that left over 20 injured in New York and New Jersey.

The bomber suspect was captured alive following a fire exchange with police today in Linden, N.J. Authorities had been looking for the 28-year-old after police issued a cellphone alert to millions of residents. The alert said to be on the lookout for Mr. Rahami, described as “armed and dangerous.”

Rahami was caught in surveillance video planting the bombs in Chelsea. His fingerprint was also found on one of the pressure cooker bombs in Manhattan, officials revealed.

A bomb that hit Manhattan’s Chelsea district on Saturday evening injured 29. Also an unexploded device was found nearby.

Further devices exploded in Elizabeth, New Jersey, in the early hours of Monday as a police robot investigated a bag. 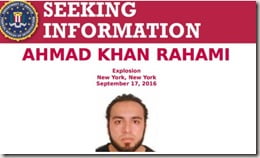 Shortly after, Rahami faced NYPD in a gunfight in which he resulted injured. According to the NY Times, residents spotted Rahami sleeping in the doorway of a bar. When police officers confronted him by telling him to ‘show hands’ Ahmad Khan Rahami pulled out a gun.

Rahami shot an officer hitting him on his vest and took off, firing at passing vehicles. He was shot multiple times until he went down. At least one other officer resulted injured.

Ahmand was taken to the hospital shortly before noon. 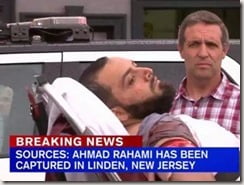 Mr. Rahami is a naturalized citizen of Afghan descent. He was born in Afghanistan in 1988.

He is said to had been living with his family in Elizabeth, N.J.

According to the FBI, Rahami attended Middlesex County College in Edison, New Jersey. Ironically, he majored in criminal justice but did not graduate.

Rahami lives with his family above First American Fried Chicken. As of now, it is not clear if his family members include a girlfriend, wife or kids.

However, we do know his family has faced in the past a series of clashes with neighbors over the restaurant. It is believed they are the owners of First American Fried Chicken.

Keep coming back for updates!