John Boyega, the UK actor known for the upcoming Star Wars: The Rise of Skywalker -has just come clean about a major screw up.

Boyega who starred alongside Daisy Ridley in Star Wars: The Force Awakens -recently confessed and admitted the Star Wars scrip that ended up on Ebay -was his. 27-year-old Boyega apparently left the script under his bed and a housekeeper took it and gave it to someone who posted it for sale on eBay for a measly $85.

All this major trouble, after John Boyega had a wild night partying. Luckily the potential catastrophic story had a happy ending. Reports say a A Disney employee saw it, and purchased the script before anyone else could. Boyega told the TODAY show “It was scary, I got calls from every official,” “Even Mickey Mouse called me, ‘What did you do?’”

Born John Adedayo B. Adegboyega on March 17, 1992; the London native was born to Nigerian parents Abigail and Samson and has a sister. He grew up with his family in Peckham, South London, England. 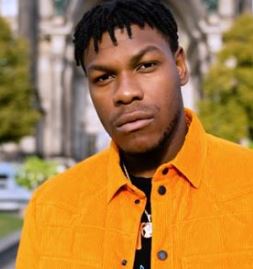 Boyega fell in love with acting after playing a leopard in a play at his primary school. He then went to classes at Theatre Peckham.
He made the right decision, as he’s won a British Independent Award in 2011 and three Black Reel Awards in 2012.
He perhaps is best known for playing Finn in the Star Wars film franchise -which earned him international recognition. He is also known for his role as Moses in the 2011 film Attack the Block.
According to this IMDb, other credits for Boyega include historical fiction drama film Half of a Yellow Sun (2013), four episodes of the television series 24: Live Another Day (2014), and the drama films Imperial Dreams (2014), The Circle (2017), and Detroit (2017).

It appears Boyega had to carry the same all alone as he appears to be currently single.
Find John Boyega on Instagram here.