Fredo Corleone is a fictional character you may recognize from the iconic “The Godfather” which is played by actor John Cazale in the Francis Ford Coppola films.

The fictional character first appears in Mario Puzo’s novel The Godfather -which was later brought to life by Cazale in the film adaptation and in the sequel, The Godfather Part II.

In the film, Fredo is seen as someone who is week and less bright than her brothers, for that, he has little power within the Corleone crime family. Since then, the term ‘Fredo’ has been used to describe someone who is seen within the same shadow.
The interest in using the term, has risen following an incident involving CNN host, Chris Cuomo in which he was called ‘Fredo’ sparking Cuomo’s rage and stating it was an insult for Italians. Cuomo was then taped threatening the man who compared him to the fictional character.

Check out interesting facts below about Fredo Corleone. 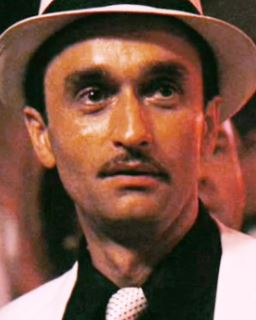 #1 Fredo Corleone is the middle of three brothers

In the film, mafia Don Vito Corleone, the head of the family, has a daughter, Connie, and three sons – Sonny, the oldest, Fredo, the middle son and Michael, the youngest. Fredo is seen as the weakest of the three brothers.

#2 He is not considered fit for the top position

Sonny is fatally shot at the Causeway and Vito later names Michael as his successor, causing tension between him and his older brother, Fredo. Vito never explicitly says why he bypassed Fredo for the top position, but it’s largely believed it was due to Fredo being weak.

During the pivotal moment when Vito is near-fatally shot. While picking out fruit at a stand, Vito is gunned down and instead of returning fire, Fredo, who was with him at the time and terrified, drops his gun.
Later in the film, while in Las Vegas, Mo Greene, a casino owner, slaps Fredo in public and when Michael calls Greene out for the behavior, Fredo defends Mo.

During the second film, The Godfather Part II, Fredo is approached by a rival mobster and offered compensation to provide special assistance in dealing with Michael. After discovering that Fredo betrayed him, Michael confronts his older brother while the two are celebrating New Year’s in Havana, Cuba.

#5 Fredo is killed in the second film

While Michael and Fredo are at Lake Tahoe, Al Neri, the bodyguard of Michael, fatally shoots Fredo on the lake while Michael watches from the window.

In “The Godfather,” Fredo is seen as the less intelligent brother, cowardly and incompetent in the powerful family’s business but desperate for respect from his father.

#7 It is allegedly used as an Italian aspersion

According to a recent inccident involving CNN host, Chris Cuomo, the expression is an insult for Italians, is the equivalent of calling comeone the N-word.

In recent years, columnists and pundits have compared Donald Trump Jr. and White House senior adviser Jared Kushner to Fredo, making the case that they are the weakest links in the Trump family.

#9 It is actually not the equivalent of the N-word

The assertion that calling an Italian person “Fredo” was comparable to using the n-word — had many Italian Americans scratching their heads and weighin in saying it just means being called the stupid brother.

#10 Being called Fredo is still an insult but not racist

Being called Fredo does not, and never can have, the same implications as being called the N-word. In The Godfather, Fredo has a bad rap because he sold out his brother not realizing what he was doing—hence, the idiot brother.