Marie Yovanovitch, the former top US diplomat -who until earlier this year served as ambassador to Ukraine.

The 60-year-old career diplomat was unexpectedly removed from her post in Kyiv in May -after being accused of being disloyal to the president. Since then, Marie has become a central figure in the Trump administration’s shadow foreign-policy campaign in Ukraine.

After being ousted, she has told Congress that Trump and Giuliani had been engaged in a smear campaign against her because she refused to let Giuliani use the US embassy in Ukraine in his efforts to obtain dirt on the Bidens. 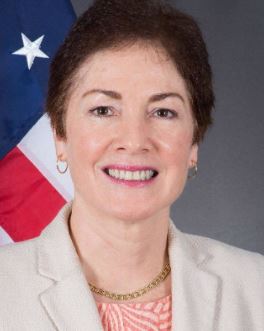 Yovanovitch -who is known as Masha -was sworn in as ambassador to Ukraine in August 2016. During her time in Ukraine she is known promoting a policy of bolstering Ukraine in its ongoing conflict with Russia through both diplomacy and security assistance.
She is a widely respected career diplomat and the highest-ranked female ambassador at the State Department. She has received numerous Presidential and State Department Awards, including the Secretary’s Diplomacy in Human Rights Award.

As a small child, she immigrated with her parents to the United States. Yovanovitch graduated with a degree in history and Russian studies from Princeton and has a master’s degree from the National War College.
She joined the foreign service in 1986 and went on to serve in ambassadorships under three presidents. She previously served as Ambassador to the Republic of Armenia (2008-2011) and the Kyrgyz Republic (2005-2008).

Her abrupt removal followed a smear campaign promoted by Giuliani, centered on the claim that she spoke negatively about the president -an allegation which she denies. Her side of the story according to reports is very simple; she was intimidated and bullied and ultimately fired, however she did nothing wrong.