Kaylee Hartung is a journalist for ABC News who came forward in telling she is coronavirus positive.

The lovely brunette took to social media to say she got tested and was diagnosed with the deadly virus and said she has experienced mild symptoms.

Hartung shared her experience with the virus during a live interview with Good Morning America from her home. She said she started feeling symptoms a few days after she returned from Seattle. Hartung had spent time in the Seattle area covering the outbreak.

She further stated that having covid-19 was completely different from having the flu, saying she felt ‘overall fatigued and ‘had a headache just right between the eyes. I was congested, I had body aches in places that I wasn’t used to having them, my lower back was really hurting’
She added ‘I knew something was off as soon as I woke up, and that’s when I started consulting medical professionals’ 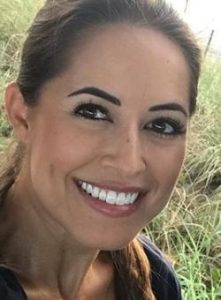 Born November 7, 1985; to mom Julie Tucker; the Baton Rouge, Louisiana native prepped at Episcopal High graduating in 2003. She earned Bachelor of Arts Degrees in Journalism and Politics from Washington and Lee University, graduating in 2007.
She has also worked for ESPN and CNN and is currently a correspondent for ABC News.

She began her career in 2012, joining ESPN -where she worked as a sideline reporter. While still at ESPN, Kaylee Hartung was featured on inRegister’s cover in the middle of the 2016 college football season.
Then in 2017 she was scooped up to join the reporting team at CNN. While at CNN, she covered everything from hurricanes to politics. Lat summer, she became a correspondent for ABC News.

Kaylee who is on her way to recovery, is currently based in Los Angeles. She is active on social media with over 60k on Instagram where she often shares work related images. She is apparently single.
Check her out on Instagram here.